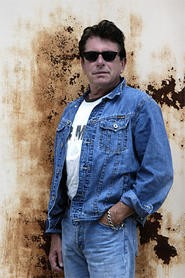 Joe Ely was born along the Rock Island line in Amarillo, Texas, three blocks from Route 66. At age 6, he witnessed Jerry Lee Lewis pounding a piano on the back of a flatbed truck; at 12, his family moved two hours south to Lubbock, the hometown of Buddy Holly.

Years later, in his early twenties, he once pulled over his Volkswagen and picked up a ragged hitchhiker carrying a backpack of LPs: It was Townes Van Zandt, the now-mythical folk troubadour. And when he was 30, he struck up a friendship with the Clash; that's Ely shouting bad Spanish with Joe Strummer in the background of "Should I Stay or Should I Go."

It seems unlikely for one person to stand at the intersection of so much history -- like the plot to some hamfisted novel. But for those who know Ely's music, it's stranger still that he's not more of a legend himself.

"I don't see why Joe hasn't been up around Springsteen levels," says Butch Hancock, Ely's longtime bandmate in the Flatlanders. "It's always been a perplexing question to me. He's such a phenomenal performer, and he's worked as hard as anybody I know on the planet."

Despite a lack of attention from mainstream country and rock audiences, the singer-songwriter and guitarist has crossed the Atlantic more times than Captain Ahab, released 14 solo albums, plus 6 more as a member of the Flatlanders and Los Super Seven, a Tex-Mex supergroup. In the next month, he'll publish his first book, the Beat-influenced travelogue Bonfire of Roadmaps, and release an album of new material, Happy Songs From Rattlesnake Gulch -- followed later in the year by an acoustic album and two spoken-word discs.

The source of Ely's Olympian drive?

"Lubbock was just a tiny town, a little oasis in a big old nothingness, and I spent every bit of my waking time just trying to figure out ways of getting out of there," says Ely, speaking from Martha, Texas, where he's visiting his daughter. "But I really loved all that sky. You gotta fill it up with something, and music is a pretty good thing to fill up emptiness with."

Now 59 and living in Austin, Ely (pronounced like "wheelie") began filling that sky early on with Buddy Holly and Roy Orbison records, later playing in bands as a teenager. But it wasn't until after high school, when he befriended Hancock and Jimmie Dale Gilmore, that the music really flowered. "I was kind of in a different world than Butch and Jimmie were, playing honky-tonks on the outskirts of town," he says. "They introduced me to the folk world and the singer-songwriter world."

As the Flatlanders, the three recorded an eerily windswept cycle of country-folk tunes in 1972. No more than several dozen copies of the album were ever released -- and only on eight-track -- but subsequent reissues have been credited with kick-starting the Americana/alt-country movement.

After that first Flatlanders' album fizzled, Ely dove into his solo career. Although all his albums boast an eclectic mix of rockabilly, Tex-Mex, folk, and country, he has colored each one with a specific hue: 1981's Musta Notta Gotta Lotta surges with hard honky-tonk, 1988's Dig All Night goes pop-rock, and Letter to Laredo, from 1995, specializes in flamenco textures. This year's model, Happy Songs From Rattlesnake Gulch, is painted in crisp Texas blues.

Ely's voice sounds great throughout Happy Songs, as it does on all his albums: a razor with a silver edge that belies his gentle speaking voice. But while other rootsy singer-songwriters of Ely's age and stature have been acclaimed for craftiness and literacy -- including Hancock, whose sly compositions have been a staple of Ely's repertoire -- Ely's own cinematic storytelling seems to have been overshadowed by his voice. Lyrically, what he does better than just about anyone is blend the earthy with the mythic. "Me and Billy the Kid," from 1987, imagines the famous outlaw caught in a love triangle, while Letter to Laredo's "Saint Valentine" concerns a sad-sack patron saint who "drove a Continental with a headlight out and a dent in the side."

There is at least one place on Earth where the full scope of Ely's artistry has been appreciated. Ely recalls his band's first trip to London in 1977. "We were just dumbfounded that we were in the top 10 of the charts, and we were attracting huge crowds. We wondered why it was like that in London, but not in Nashville. It was probably that the guitars were a little too rock and roll for country at that time."

But those guitars weren't too loud for Brits in the thick of the punk explosion, and among Ely's new fans, he counted the Clash, who saw him play at London's Venue club. Ely and the Clash -- Strummer, in particular -- quickly bonded over a mutual love of Buddy Holly, Sonny "I Fought the Law" Curtis, the Beats, and poetry, resulting in joint tours of the States and United Kingdom.

"I thought that they were an incredible band, and Strummer had an amazing sense of lyrics," says Ely. "I was glad to get to know them."

Back home, Ely never achieved pop stardom, but he does retain a committed cult following as a solo artist and Flatlander -- as well as the esteem of his peers, including Springsteen, who appeared on Letter to Laredo. He even won a Grammy in 1999 with Los Super Seven (although presenter Faith Hill mispronounced his name). But fame has never been the sole point of Ely's journey.

One of the entries in Bonfire of Roadmaps goes back to the early Flatlanders days. On a whim, Ely and a friend set out for the East Coast, jumping trains -- just to watch the leaves change color: "By the time we got up to New England, all the leaves had fallen off the trees, and we were freezing to death. I guess I just always wanted to see what was on the other side of the horizon."