Thursdays through Saturdays at 8 p.m. and Sundays at 3 p.m. 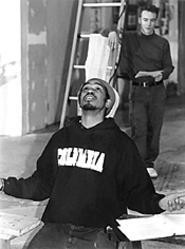 How does a modern black man become a disaffected European immigrant from the 1920s? By getting beyond the limitations of skin color.

"I hate painting things black and white," explains Jimmie D. Woody, the African American portraying the misogynistic, misguided Yank in Eugene O'Neill's The Hairy Ape, opening Wednesday, March 20, in Cleveland Public Theatre's Gordon Square Theatre. "If O'Neill had lived today, he would have written it for somebody who's black."

Race is a vital concept within the play, which was penned more than 80 years ago and originally written with white wage slaves in mind. It depicts the rift between the working class and the social elite, and follows Yank, an ocean-liner coal stoker, through a series of tragic foibles.

Altercations involving the daughter of a steel magnate, the law, and even his own legion lead the brutish character through an inevitable downward spiral. The more he is likened to an ape, the closer Yank comes to his own crude enlightenment. "He's not just a raging lunatic," Woody explains. "He's a raging, thinking man."

Director David Herskovits thinks the nontraditional casting of the role is crucial. Once theater becomes predictable, he says, it loses its relevance; it should always be a new and exciting experience. "When we serve too much of the past of the theater, we sacrifice the form," he explains.

The theme still resounds today. Herskovits likens the world of The Hairy Ape to "a strange dream of Cleveland," one in which theatergoers -- watching the story of factory owners treating their workers like disposable machines -- can leave the theater and witness steelworkers being handed their walking papers from local mills.

Unfortunately, adds Woody, "a lot of people can see a bit of themselves in Yank."