The Return of the King marks a zenith in cinematic potential.

December 17, 2003
comment
The Lord of the Rings: The Return of the King 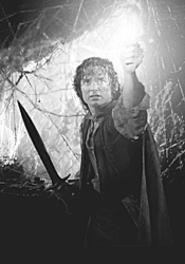 You know how it's often the ones we love whose flaws are most apparent? Well, when it comes to The Lord of the Rings: The Return of the King, I am smitten. This film is a miracle, an extravaganza equal to its predecessors and in some ways more stunning. It is a profound testament to the extraordinary power of moving images and sound. And, before sharing the love, I am going to spank it.

First off, and most significantly: Holy crap, Peter Jackson! What were you thinking? You don't cut Christopher Lee out of your movie! In the character of Saruman you have a high-ranking villain with an actual face and awesome voice, a living legend who's been delivering cinematic dread since before you were born, and -- pivotally -- a character of great significance here, if you had kept Lee and Brad Dourif in the film and properly delivered the dénouement of Tolkien's yarn.

The tome's author, a smart fellow by most accounts, explicitly states in his foreword that "The Scouring of the Shire" (in which the blissful region of Hobbiton must be reclaimed, after going to hell under the malevolent hand of Saruman) is vital to the telling of this tale. "It is an essential part of the plot, foreseen from the outset," he writes (italics mine). And yet, because you simply didn't like it -- or possibly because it foreshadows pretty New Zealand being overrun by the mad hype of this franchise -- you gave it a miss? Quel dommage!

One other bitch: Elijah Wood. Even after conducting an unofficial poll among random women -- for whom this cinematic Frodo approximates their fantasy of masculine innocence, or something -- his casting remains an irritation. Wood is way too young (Frodo is supposed to be 50 in these adventures), and Ring-geeks may be silenced by stating that, aesthetically, he simply lacks the experience to fulfill this role. Wood looks like a spoiled princess in a poofy wig, not a forlorn orphan with a monumental burden. He's a sticky little turd in the middle of an angel-food cake. The only salvation is that very soon we'll have the technology to delete Wood on our home computers and edit in someone better. Gene Hackman would have been better. ("Henh-henh . . my dear Sam . . . henh!")

Whew. Now, for neophytes -- if any remain -- some plot: Having followed and lost and reclaimed glorious Gandalf (Ian McKellen) as their wizardly leader in the previous two movies, the Hobbits-only mission of pissy little Frodo (Wood) and determined Sam (Sean Astin, brilliant) continues. We open here on the early days of smacked-up Sméagol (Andy Serkis, sans CG at first) whose dubious assistance as psychotic alter-ego Gollum is required to lead the Hobbits to the volcano Orodruin, in the middle of Mordor. There, it is hoped, they can destroy the evil One Ring of demonic real-estate tycoon Sauron, thus allowing the commencement of the groovy Fourth Age of Men.

Meanwhile, these Men, led by their reluctant, perchance-to-be-king Aragorn (Viggo Mortensen, tops) and Gandalf, are busy uniting the equestrian army of Rohan under King Théoden (Bernard Hill), his niece, Éowyn (Miranda Otto), and his nephew, Éomer (Karl Urban), with the army of Gondor, presently under the command of its steward, Denethor (John Noble) -- a total nutcase fraud very similar to our current American president (Bush, please follow his example to its conclusion). Denethor's fave son, Boromir (Sean Bean), bit it in the first movie, and here his passionate second son, Faramir (David Wenham), tries to satisfy Dad by means of a suicide mission to reclaim the ruined city of Osgiliath. With Sauron's innumerable minions pouring in for the final destruction, it's a good thing there's a Dwarf named Gimli (John Rhys-Davies), an Elf named Legolas (Orlando Bloom), and two rather excellent Hobbits named Pippin (Billy Boyd) and Merry (Dominic Monaghan) helping in the fracas.

These are just the basic details of this 200-minute movie. Personally, I remain most taken with the first one, The Fellowship of the Ring, because I prefer the mystique of beginnings to the concreteness of endings (especially glaringly incomplete endings). But it's very unlikely that fans will kvetch -- even in 20 years, when these outrageously slick movies start looking "very turn-of-the-century." From the enchantment of Elvish Arwen (Liv Tyler) convincing her father, Elrond (Hugo Weaving), to reforge a vital sword, to intrepid Aragorn using that sword to lead the ghostly Army of the Dead, nearly all factions of fantasy are smartly served by Jackson, his crew, and his co-screenwriters, Fran Walsh and Philippa Boyens.

You can pull out whatever symbolism you like, too. Some cite racism -- which almost fits, when you watch all these white people battling "ethnic" Haradrim atop their mammoth-like Mûmakil -- but this is an old-fashioned Northern European myth, which largely neutralizes the complaint. More interesting, and much as in The Incredible Shrinking Man, when diminutive Frodo and Sam battle the massive female spider Shelob, they're very clearly confronting a furry, gargantuan vagina dentata, complete with goop-spurting action -- echoes of Jackson's devouring-mother issues in Dead Alive. A little later, ardent Éowyn confronts the not particularly interesting Witch King (Lawrence Makoare) astride his enormous, blatantly phallic Fell Beast. Guess what she does to its head with her sword? (Cover your ears during the shrieks of approval.)

Of course, the marketing hype and CG effects -- more of both than in the previous films combined -- threaten to dwarf the actors at every turn. This is where Jackson, whose finest film remains Heavenly Creatures, works for his pay. True, without the stunning designs of Alan Lee and John Howe, the effects of Richard Taylor, the music of Howard Shore, and the efforts of thousands of others, this movie would not exist. But consider only one scene, wherein mad Denethor stuffs his face while his son Faramir rides toward almost certain doom and Pippin enchants with an ethereal song, and you'll see it: Jackson is not only a splendid visual stylist, he's an ace with actors, editing, color-timing, tone -- the works.

After all the nitpicking and swooning, the overall achievement of The Lord of the Rings trilogy finally comes down to this: Within the last century of cinema, with very few exceptions, it has never been so easy to say fucking wow about a movie . . . and mean it.