With Clarence Bucaro. Thursday, January 30, at the Beachland Ballroom. 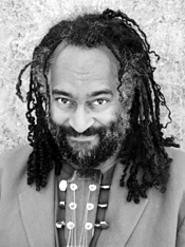 Now that John Mayer has made the merging of jazz, folk, and rock way cool in the eyes of the MTV audience, maybe there's a place for Vance Gilbert. Sure, Gilbert doesn't have Mayer's boyish good looks. Gilbert is older, he's black, and he has hair that must have inspired his song "Twice Struck by Lightning." But this Boston-based coffeehouse veteran has plenty going for him, too, like virtuoso guitar work, lyrics that probe the psyche without descending into Tracy Chapman-style overseriousness, and a rich tenor that reaches every corner of a room. Gilbert explores emotional wilderness and touches on society's ills as well as any singer-songwriter, but he can do so with a sly grin. Check out "Waiting for Gilligan" on his fifth and latest CD, One Thru Fourteen, and join Gilbert in smiling as wide as the man's impressive repertoire.