Andrew May revels in an ego-involved stage show. 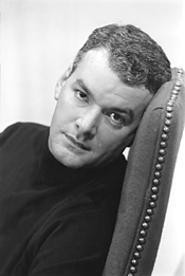 If actor Andrew May had to choose between being named Cleveland's Artist of the Year and seeing his latest stage vehicle become a smash hit, he'd take the latter. No hesitation.

Of course, the choice is purely theoretical, a little like the premise of the play in question. Written by Murphy Guyer, The Infinite Regress of Human Vanity centers on mathematician Kurt Gödel's incompleteness theorem. If that sounds deep, don't be put off. It's actually a comedy. About the theater.

May promises that the play, which opens next week, will appeal to just about everyone. "It's a really witty take on art, on political correctness, on the modern state of theater," he says. Developed for the Cleveland Play House's 1999 Next Stage Festival of New Plays, it had a limited run the following season, playing to sold-out audiences. Its popularity alleviated worries that the work was "too much of a theater in-joke," says May, an artistic associate at the Play House. "We had to have the audience come in and give it validation."

Guyer's Vanity is as much about the human ego as it is about actors, directors, and playwrights. May stars as Nathan Pine, a playwright whose fragile psychological state is severely tested when his work is produced for a new-play festival. Nobody around him gets his point: that people are incapable of escaping their own vanity and self-interest. This is Guyer's point as well, and he illuminates it by applying Gödel's mathematical theorem to the realm of human vanity. Simply put, Gödel stated that rational thought can never penetrate to the final, ultimate truth; Guyer suggests that it's impossible to get beyond self-interest to arrive at truth.

Shallow thinkers need not cringe. Guyer's fast-paced script is more about witty dialogue, cogent observations, and broad characterizations than overt philosophizing. As Nathan, May is onstage virtually the entire time. His character realizes, to his growing horror, that people not only misunderstand his play; they want to change it to suit their own purposes. The work "gets to the crux of humanity," says May. "It gets to our inevitable flaws."

Playwright Guyer -- "an incredible man of the theater," says May -- is also an actor whose credits include L.A. Law and The Sopranos. Now appearing in the Broadway-bound production of The Graduate with Kathleen Turner (he plays Benjamin's father), he was able to spend only a couple of days in Cleveland working with the cast that May assembled. May says Guyer has tweaked the play considerably since it was performed here.

May fully expects Vanity to become a staple for theaters around the country. It's that good, he says. In the meantime, as he's subjugating his own vanity for the sake of the play, don't forget to applaud wildly for the leading man.