The Play House offers a debut no theater lover should miss. 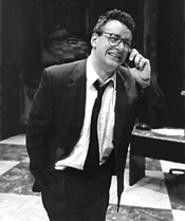 At last, the rampant selfishness that rules the theater has been taken out of the administrative offices and placed on the stage where it belongs. Giddy whiffs of chaos are emanating from the main-stage premiere of Murphy Guyer's The Infinite Regress of Human Vanity, which, in spite of its impossible title, is undoubtedly the most triumphant Cleveland debut in decades.

The play, splendiferously inhabiting the new Baxter Stage at the Cleveland Play House, has a rich lineage. Its cutting social satire is in the tradition of Mark Twain and George S. Kaufman. It also winks at Luigi Pirandello's games with truth and illusion, and weaves in a touch of Gilbert and Sullivan's madcap mirth.

What makes this triumph even sweeter is that it's not the work of out-of-towners, but has been cultivated by a talented local trio: Play House associate artist Guyer, resident director David Colacci, and artistic associate Andrew May.

Every year since the ascendancy of artistic director Peter Hackett, playwright Guyer has managed to whip up a piece of effective theatrical skulduggery, be it political, sexual, or metaphysical. He even managed a crafty variation on Mark Twain's Puddin'head Wilson. In each case, his play would stride two-thirds up the mountain when an unfortunate shift in tone, a wrongheaded plot turn, or a poisonous piece of stridency would send it hurtling into the flop graveyard.

Here, Guyer has found unmitigated success with a perfect re-creation of the classic screwball farce pioneered by Kaufman. Following the template of an eggheaded sap angling for the big time, Guyer has his protagonist exploding a land mine of inflated egos and innumerable double-crosses. Like Kaufman, Guyer employs lightning wordplay and ever-escalating complications to present a microcosm of American culture. In this case, a new-play festival is the device used to unearth foibles ranging from rampant feminism to pandering political correctness.

Its central character is Nathan Pine, here exuberantly played by May. Pine, a playwright who inadvertently found notoriety by pushing a producer to death over a balcony, espouses the belief that mankind is incapable of rising above self-interest. To embody this philosophy, scene designer Robert N. Schmidt has painted an endless succession of stages and mirrors reflecting a universe of narcissists, each smitten by his own image, impervious to all but self-aggrandizement.

As the play commences, Pine tentatively shows up to safeguard his script, which is being produced for the festival. The ensuing action follows his comic battle to protect himself from a tankful of artistic piranhas. They include pretentious phonies butting heads, a prissy know-it-all insisting on outing the determinedly straight Pine, a puffed-up actor trying to outdo Keanu Reeves in vapid attitudinizing, and a feminist police dog sniffing out chauvinism.

In the manner of early Marx Brothers, before they were corrupted by censorship and MGM, there is no time for romance or sentiment. It's an hour and 45 minutes devoted to anarchy and trickery, to the point where we're not even sure we can believe what we're seeing. And what bliss it is to be wonderfully fooled.

The essence of farce is crack timing, and director Colacci never lets this top-notch work falter. He has each member of his company sound a different note of human vanity. Mary Hammett is a cherishable portrait of vacuity as a spacey butterfly in a dance of fluttering credulity. Steve McCue's vainglorious actor can't stop visualizing the whole world in brilliant lavender. Jonathan Partington, a Cleveland refugee snatched back from Chicago, musters up some prime petulant posturing in his dizzy take on movie-star vanity. Rondi Reed's fire-breathing dramaturge is a comic grotesquerie worthy of Dickens. Paul Floriano's director, decked in perpetual baseball cap, glimmers with a luxurious obtuseness.

May holds the evening together. He has a voice that functions like a xylophone, rising to higher and higher pitch as he succumbs to hysteria. It's a fearless comic performance: a frantic young prince defending the kingdom of his vanity -- Hamlet on nitrous oxide.

After years of being on the receiving end of other cities' goods, Cleveland has generated a theater asset that can be proudly exported.

There are two ways to bring an animated film to the stage: First, put some hungry athletes on skates, have them pantomime to a prerecorded soundtrack, and add On Ice to the title. Or, there's Disney's Beauty and the Beast method: Find a cast proficient in musical theater skills, one that could do Oklahoma! in its sleep; throw in the best special effects and accoutrements that money can buy; and augment the score with songs only a shade less charming than their movie counterparts. Keep up a consistent level of quality, and you'll have a manufactured enchantment as hard to resist as the patent whimsy of theme parks. This is a musical that faithfully delivers on its promise: a skilled professional stage realization of a beloved movie. Cleveland may have missed out on the Imax reissue of the film, but what goes on at the Allen Theatre is more than sufficient compensation.