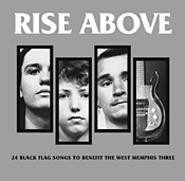 Filled with lackluster covers, the average tribute album isn't worth the CD it's burned on. Rise Above, however, not only deserves your entertainment dollars, but it forwards them to a good cause. (Visit www.WM3.org for details about the controversial case.)

Aside from Ryan Adams's acoustic "Nervous Breakdown," the Rollins Band (a.k.a. stoner-rock trio Mother Superior) handles the disc's instrumentation. Reined in by faithful re-creations of abrasive Gregg Ginn-Chuck Dukowski compositions, the singers (including Slayer's Tom Araya, Clutch's Neil Fallon, Ice-T, Iggy Pop, Slipknot's Corey Taylor, and Motörhead's Lemmy Kilmister) can't help but deliver the songs with their original lethal intent. Ginn's legendary shredding, business acumen, and intricate song structures have obscured his legacy as a lyricist. Here, his efficient wit contrasts nicely with the disc's few caffeine-driven, late-era rants, favoring antiauthoritarian catharsis over interpersonal manifestos in such tracks as the snarling "American Waste" and the tongue-in-cheek "Six Pack" and "TV Party." In an era that has seen punk become a pop genre, the songs remain as relevant as they were in the dark days that spawned them.