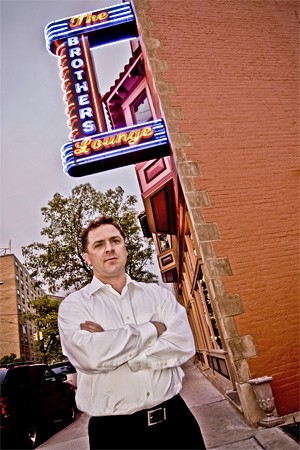 Even at rest, Giuseppe O'Connell is buzzing, twitching on his bar stool at Brothers Lounge like a drop of water on a hot skillet. His fingers scour the bartop, searching for scratches or stains. His dark eyes dart across the ductwork, seeking out dust. And his mouth — well, frankly, the guy rarely shuts up.

It's probably this compulsive energy that's made the 42-year-old O'Connell one of Cleveland's top "front of the house" guys, a multitalented server and manager whom chefs and owners consider a major player in the local restaurant scene.

Not that he can't be a pain in the ass. Ask O'Connell why he's bounced around from job to job so much, and he'll tell you: "My mouth gets me in trouble."

Or mention his name to former employers, and watch the eye-rolling begin. "He's one of the best in the biz," says chef-restaurateur Marlin Kaplan (One Walnut, Luxe, and the former Marlin). O'Connell claims Kaplan has fired him twice. "He knows his food, he knows his drink, and he has a good heart. But Giuseppe is definitely a character. I'm not sure anyone can understand what really makes him tick."

These days, O'Connell's manic talents are on display at the recently reopened Brothers Lounge, where he works as GM for owners Chris Riemenschneider and Rodger Riggs. Among his responsibilities: developing the beer, spirits, and wine lists; determining the dinner menus; hiring a chef; training servers; overseeing details of design, decor, and maintenance; managing costs; spearheading promotions; and ensuring customer satisfaction. Most important, he has the duty of making money for his bosses.

Front-of-the-house work is brutal, a seething cauldron of long hours, low pay, strife, and scant respect. The blows come from all directions: guests, servers, chefs, and owners, to be sure, but also vendors, bill collectors, health-department inspectors, and the guy who was supposed to shovel the sidewalk but never showed up. Yet somehow, O'Connell has thrived in this harsh environment for more than 17 years, contributing to the success of some of the region's most notable restaurants.

He worked at the former Piccolo Mondo in the then-nascent Warehouse District, with celeb-chef Michael Symon "back when Symon had hair." He made a stop at the former Marlin, Kaplan's groundbreaking restaurant on East Sixth. He did a gig with chef-restaurateur Sergio Abramof at University Circle's Sergio's. Then it was back to Kaplan at his elegant One Walnut.

Last fall, O'Connell was tapped for a stint at Crop Bistro, on West Sixth Street, where he helped innovative chef Steve Schimoler launch his popular restaurant. And this winter, it was on to Brothers Lounge, probably his most all-encompassing gig to date.

It's an impressive résumé for a self-styled "angry guy" who claims to possess "no moral center." Ask Schimoler what O'Connell's "fatal flaw" is, and he just shakes his head. "He's adopted, you know. Maybe he never got over it."

Still, in a town where professional managers are worth their weight in truffles, O'Connell seems to have earned his often-caustic opinions. Predictably, when he settles into a Brothers' bar stool for a recent interview, his frank talk seems designed to ruffle feathers as much as to enlighten.

His thoughts on guests: "Little children," whining for their food and drink. Troublesome servers: "Tray monkeys," just killing time until they find a "real" job. And the average chef: "Lazy," settling for mediocrity rather than pursuing perfection.

That last one — mediocrity — especially boils his borscht.

"All diners want is good execution and consistency," he says, slapping his hand on the bartop. "Unfortunately, that's exactly what most local kitchens lack."

The result, he says, is inferior food showing up on your table. "Absolutely," he says, rolling his eyes. "Some chefs would rather lose hundreds of dollars in repeat business than throw out a $20 piece of fish that's gone bad, and that's bullshit. Bullshit! It doesn't matter if Jesus Christ is in the kitchen: If the guest doesn't like what they're served, they aren't coming back!"

While he holds shortsighted chefs and managers mainly responsible for such shenanigans, O'Connell believes diners must shoulder some blame, especially the "martyrs" who wouldn't think of raising a fuss about an overcooked steak or stinky piece of fish. Such complicity frustrates him as much as servers who don't know flank steak from filet mignon.

"If there's something wrong with the food, then send it back, and give the kitchen the chance to make it right," he preaches. Otherwise, diners aren't merely throwing away their money; they're letting the kitchen get by with shoddy cooking, and even contributing to the restaurant scene's decline. (And don't be overly concerned that staffers will mess with your food in retaliation, he says. "I know people worry about servers spitting in their food . . . but I've never seen that happen.")

O'Connell's other flash point is poor service. It's prevalent in Cleveland, he says, because of the relatively small pool of qualified candidates and owners' often-low expectations. "And it's impossible to train these people," he rants, "since most of them think they know everything already!"

In fact, if he could drill any single idea into servers' heads, it would be this: Diners just want to be loved.

Customers could eat food at home, he reminds them. "But when guests come to a restaurant, it's because they want to be wanted. They want a little respect, a little schmoozing. And they want a happy server. They don't give a shit how many hours you've been on your feet or if you hate your boss. They want to be treated like they're special."

Of course, it's a two-way street. While he's dishing, O'Connell has some choice words for diners too. For one thing, he wishes they'd grow up.

"I can't tell you how many times I've seen four guys in business suits turn into babies when a buxom server comes by," he says. "It's like with strippers, you know? I want to tell them, 'Hey, she's only here because she's doing her job. She doesn't like you!'"

Also, he urges compassion. "Servers have it rough, remember. To meet 50 strangers every day . . . to not only put up with them, but to make them happy . . . Do you have any idea how stressful that is? How intimate it is? So be nice to your servers. They aren't your slaves."

Finally, O'Connell suggests that diners suck it up and commit to tipping fairly. "Does the public understand that servers are only making $3.85 an hour? Guests always complain about hating to tip. But if you want a human being to serve you and clean up after you, you have to pay for it. If you don't want to do that, stay home!"

Despite his apparent cynicism, O'Connell has nothing but praise for most of the city's top toques. He calls Michaelangelo's Michael Annandono "insanely talented." Of Momocho's Eric Williams, he says, "His food tastes real, the flavors are intense, and that guacamole sampler is off the charts." Other faves include Karen Small (Flying Fig), Sergio Abramof (Sergio's and Saravá), and Kaplan. He especially admires Kaplan's prix fixe menu at One Walnut.

"Do you know what kind of balls it took to do something like that in this town? Anything different is a hard sell in Cleveland — look at tapas! — but Marlin made it happen."

After all this, you might guess that O'Connell is itching to open his own spot, one he could rule with an iron fist. But he isn't. He claims he's content just to be a hired gun, the front-of-the-house "bad guy" who hires and fires, pleads and plots, comforts and afflicts — all with the goal of making someone else's restaurant run smoothly.

"My job is not fun," he says. "But if I do it right, then the people who have fun are the guests."

Tour the Brothers Lounge with Giuseppe O'Connell at clevescene.com/slideshow.