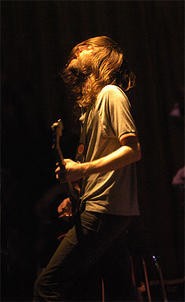 "Picking Denny's clip was an easy choice," says Bernie Kaminski, the show's executive producer. "Some of his rhymes are funny, and the lo-fi quality of the video is amusing. But the thing that has made the clip such a sensation is his total commitment to the concept of being the 'Average Homeboy.'"

Now a professional videographer, the Canton native produced the low-budget video in 1990. (The song was recorded with just a cassette recorder, microphone, and keyboard.) The clip, however, didn't become an internet sensation until last year, logging over a million views via YouTube, MySpace, and other sites. More than 20,000 viewers voted for its yet-to-be-revealed spot on the countdown.

The video captures the mullet-crowned white guy wearing sweaters, a day-glo jacket, and a Kent State jersey as he plays baseball, lounges in the 'burbs, and mows his lawn. At the time, Blaze submitted it to MTV, but everybody involved soon forgot about it. Last year, though, an anonymous source unearthed the video and posted it on the internet. It eventually went viral, spawning the catch phrase "You've been Blazed."

Blaze has since cut the mullet, and he's recorded several CDs and cassettes in his own studio. He hopes the VH1 appearance will create some label interest.

"My material is uniquely from a rural point of view," says Blaze. "My style of rap comes from the suburbs of Ohio. I'm just a middle-class white guy who likes to rap."

· According to Nielsen SoundScan, Chimaira's Resurrection LP sold approximately 16,000 copies its first week, which landed it at No. 42 on Billboard's album chart. (In contrast, Korn's MTV Unplugged moved 51,000.) Chimaira debuted at No. 1 on the U.K.'s Rock/Metal Album Chart.

· A representative from Bad Boy Records says the long-delayed debut album from R&B singer Cheri Dennis is due this spring. The former Clevelander's disc was originally planned for release last summer.

· American Werewolves have recorded everything but the vocals for their yet-to-be-titled third album, which ups the ante for the hardcore band's unique hybrid of old schools. "It is the real deal with the violent '50s on this one," says frontman Trevor Moment. "We used all vintage equipment and recorded most of it live onto tape. We may be the first group to ever mix country and youth crew."

· The Black Diamonds' Friday, March 16 show at the Beachland was their first after a split with singer Chad Van Gils. Read more about it at Scene's C-Notes blog, which also features a review of the Daughtry show, photos from the My Chemical Romance concert, and a download of a Biggie Smalls mixtape. It's all free at www.clevescene.com/blogs.