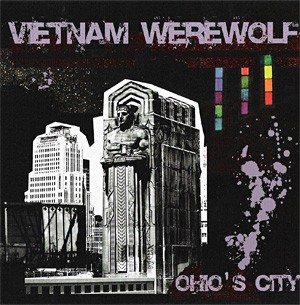 Vietnam Werewolf: terrible band name (intentionally so), but a really good band. And it's a perfect fit for anyone still bummed about Amps II Eleven breaking up, since it flies the Cleveland flag just as proudly. Musically, the group teeters between old-school punk and hardcore. Raging toward abandon from the get-go, the power-trio lineup that recorded the album — it's since expanded to a four-piece — plays like it's out to prove it bleeds nothing but orange and brown. Alternating cynicism and nostalgia, "I Used to Be a Kid, I'm a Notary Public Now" follows a blissfully discordant solo with throat-straining, shout-along verses. Then the songs get louder, faster, and looser, as Ohio's City barrels along. And true to the band's name, "In Case You Were Wondering" hits like a canister of napalm.