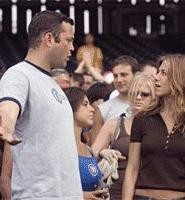 You know how, in most romantic comedies, the best friends are nearly always more interesting than the actual leads we're supposed to care about? The Break-Up doesn't play that game. Vince Vaughn is the focus and the primary source of entertainment, which is all the more impressive when you consider that the supporting cast this time around features Vincent D'Onofrio, Judy Davis, John Michael Higgins, Cole Hauser, Jon Favreau, Ann-Margret, Jason Bateman, Joey Lauren Adams, and even Peter "A Christmas Story" Billingsley.

Jennifer Aniston's in it too, but she's basically playing it straight, as a sounding board for Vaughn's riffing. (He seems to have improvised much of his own stuff, which may explain his story credit.) Aniston's strength is also her weakness: Though she's beautiful and appealing, hers is a believable, real-person type of beauty that's a little less than audiences seem to want from a big star in a high concept. Aniston consistently chooses to be in better movies than, say, Angelina Jolie, but look who always gets the higher-profile jobs; when it comes to star-driven movies, unattainable glamour is the better sell. Of course, Vaughn is a very funny comic actor, so he can get away with baggy eyes and a paunch.

In fact, the whole point of this story is that, despite his many flaws, he can get by solely on being very funny. His Gary Grobowski is a self-centered smartass who's obsessed with videogames and shooting pool -- hardly a catch, you might say, but he's got a silver tongue and a way to make people laugh, which is how he lands a first date with ballet-loving Brooke Meyers (Aniston). Before long, however, he's doing all that annoying man stuff that we're pretty familiar with: throwing clothes everywhere, being highly unmotivated to do chores, and listening to his PlayStation more than his girlfriend.

She figures that threatening to leave will make him shape up, but she has neglected to account for his boundless narcissism and inability to realize that he's done anything wrong. Some of his complaints about her sound reasonable, but since we can only take his word for them, Brooke comes off as the better person in our eyes (which makes one suspect that director Peyton Reed had a significant other looking over his shoulder). Of course, playing the angel is never as much fun as being the imp, so while Brooke smells of roses, Gary is the one to watch.

The casting of Jon Favreau as Gary's best friend, Johnny, is the canniest choice Reed makes, giving the movie a sense of being a sequel to Swingers some 10 years on and effectively beating Kevin Smith to the punch (Clerks II appears to deal with similar issues). This is what became of Mike and Trent, the cocktail-swillers: Mike gained weight, started going bald, and became angry and belligerent; Trent remained the same smooth-talking man-child and got a great gal, but he's finally starting to discover that his act gets old when a decade has moved on but he hasn't.

Complicating matters for Gary is the Chicago condo he and Brooke share, which neither can afford alone. This leads to a series of territorial battles; it's pretty much the same story as Danny DeVito's The War of the Roses, only nobody dies in this one. There are one or two characters you may feel like killing, however; mainly Justin Long (Jeepers Creepers) as the de rigueur effeminate gay guy, who, in a movie with a boring lead like Richard Gere, might be described as comic relief. But since he's way less funny than Vince Vaughn, "annoying queen" is a better term. The movie already has John Michael Higgins as Brooke's closet-case brother, who sings Yes covers in an a cappella band called the Tone Rangers.

Is The Break-Up worth your time? Let's put it this way: Whenever Vaughn is onscreen, it is. When he's not, it ain't. The movie's a comedy, but it's also about a breakup, so it gets a bit maudlin toward the end. If it were a sitcom, there would be at least a couple of mandatory jokes during the designated tears period. Rumor has it that the original ending was reshot after tanking with test audiences. The version you'll see feels natural, but also a bit too abrupt.