The Godfather may be a distant memory, but the recipes are alive and well. 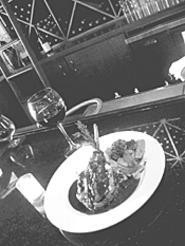 Long before Tony Soprano, Paulie Walnuts, and Big Pussy, there was The Godfather. By any measure, Francis Ford Coppola's 1972 masterpiece is a twisted tortellini of a movie, stuffed to overflowing with a quirky blend of R-rated violence and idealized domesticity. And through it all, Italian food plays a starring role. Consider: While viewers are privy to nearly two dozen murders, more than twice that many scenes pay homage to the pleasures of the table. Is it any wonder, then, that for some of us old-timers, the opening notes of Nino Rota's score conjure up images of veal chops and cannoli as much as of mob hits and mayhem?

So sure, when Pete Bosinger decided to open an Italian restaurant in Parma back in 1995, naming it Corleone's must have seemed pretty clever. Still, 32 years after The Godfather fired its first shot, the cachet has got to be wearing thin: For every guest today who immediately associates the restaurant's name with the movie, we're betting there are two who figure ol' man Corleone is the guy who runs the place. The same goes for some of the monikers that Bosinger assigns to the restaurant's entrées. Vitello Marciano? Pollo Luciano? For most folks under 40, those names won't elicit much more than a shrug.

All of which is by way of saying that, if "youthful" and "edgy" are what it takes to toss your trenne, this snug little restaurant at the far end of a suburban strip plaza may not be your kind of place. But on the other hand, if good food, brought forth in large portions at reasonable prices, is what makes your alfredo creamy, look no further than the dimly lit Corleone's.

Although the bare walls and subdued beige-on-beige color scheme of Corleone's main dining room are more Holiday Inn than Pottery Barn, the space is far from cheerless. An undulating half-wall divides the narrow, split-level room and provides the upper-level tables, in particular, with a sense of intimacy; the coziness factor is furthered by the soft lighting that drifts down from the alabaster fixtures. On both levels, broad-beamed schoolhouse chairs pull up to tables double-draped in white cloths and paper toppers; basic white votives in clear glass holders add a spark of sophistication, and lively jazz plays in the background. (Just try to avoid being seated at one of the undersized two-tops, where we found there was barely enough room for the big menus, let alone plates and glasses.)

The decor in the remainder of the restaurant -- a lounge and a second, smaller dining room -- is a little more stylish. The second dining area, used for private parties and overflow seating on the weekends, packs a real visual punch with its deep crimson walls, black-framed mirrors, and a crystal chandelier. And the smoking-permitted lounge feels almost urbane, with its rich wooden paneling, exposed ductwork, and sleek black bartop.

Looking at the handsome wine bins climbing the wall behind the bar, we weren't surprised to learn that Corleone's massive wine menu has received Wine Spectator's Award of Excellence every year since 2001. Neatly organized by varietal, with a focus on West Coast and Italian vineyards, the list contains approximately 350 bottles, including plenty of choices priced at or below $35. (The really pricey darlings, like the Quintessas and Opus Ones, are segregated in the back of the book, in the Captain's List.) A separate, smaller menu offers 37 wines by the glass; unfortunately, though, none of the wines is offered as a half-bottle. And another small gripe: The "house wine recommendations" included on the dinner menu aren't the sexiest little numbers on the shelf. But wouldn't it make it easier to order them if their prices were listed there, too?

The dinner menu is a massive tome, with more than a dozen starters and 39 entrées, fairly evenly divided between veal, chicken, steaks and chops, fish and seafood, and pastas. (The slightly smaller lunch menu includes personal pizzas, sandwiches, and meal-sized salads, too, mostly priced at less than $10.) Appetizers -- like a riotous tangle of tender, lightly breaded calamari, served with a bright, well-balanced marinara; or an avalanche of lightly floured and fried artichoke hearts Sorrentino, sided by a flavorful veggie-and-cream-cheese dip -- are obviously sized for sharing. And sharing is definitely a smart move, since all entrées come with a generous salad of romaine and field greens, topped with red onion rings, grape tomatoes, homemade croutons, and shredded mozzarella, along with a miniature loaf of warm-from-the-oven Italian bread, with a saucer of herbed dipping oil. And, oh yeah, a side of al dente linguine marinara accompanies most meals.

While the sheer number of entrées can make choosing a main dish seem daunting, astute menu sleuths will note that the actual differences between many of the entrées are minimal, and that the kitchen relies repeatedly on certain ingredients and preparation styles, with only slight variations. The eight boneless chicken breasts, for instance, include the Patricia ("lightly breaded, sautéed with fresh mushrooms in a spicy marinara cream sauce"), the Marsala ("lightly floured, then sautéed with fresh mushrooms in a Marsala wine sauce"), and the Lemon ("lightly floured, then sautéed with mushrooms and simmered in a lemon wine sauce"). And among the veals, there's the Sinatra (layered with spinach, ricotta, eggplant, and provolone), the Fratello (layered with prosciutto, eggplant, sliced tomato, and provolone), and the Saltimbocca (layered with prosciutto, sage, and provolone).

But each of the entrées we sampled turned out to be a well-prepared treat. Take that rich, comforting veal Sinatra, for instance, finished with perfectly sweet-tart marinara and baked to a bubbling bronze, or the lively chicken Luciano, fork-tender beneath a piquant sauce of roasted red peppers, punctuated with capers, diced tomatoes, spinach, and artichoke hearts. A specialty of the house, Penne alla Siciliana, was a faultless toss of firm penne pasta, fennel-scented Italian sausage, chicken, peppers, and onion, in a zesty sauce of olive oil, garlic, and crushed red-pepper flakes. And if the "crabmeat-blend" stuffing inside the enormous long-boned veal chop Masetta tasted mostly like bread crumbs, the juicy chop itself was unimpeachably flavorful; with a topknot of slender onion rings and sides of creamy risotto and mixed veggies (slightly overcooked, but well-seasoned), and a swoosh of ruby-red Cabernet reduction, the $25.99 price still seemed like a good deal.

Corleone's desserts keep mainly to the beaten path and include amply sized servings of tiramisu, cannoli, and an assortment of fancy cheesecakes from Slices Fabulous Pastries. Again, sharing is not a bad idea. One evening's wedge of pineapple-kiwi cheesecake -- graham-cracker crust, cream-cheese filling, and a topping of juicy kiwi slices and bits of pineapple -- was fresh-tasting and suitably indulgent, but not cloying. More satisfying still was an order of twin cannoli, the tender-crisp pastry tubes freshly filled with a chocolate-chip-studded blend of ricotta and cream. While the filling was a bit runnier than most, its dairy flavors were wholesome and sweet, and the delicate shells added a crunchy counterpoint.

Inevitably, though, the pastry brought us back to where we began, pondering the lasting lessons of The Godfather. Some film buffs may say the message is all about family; others will tell you the moral is "honor." After dining at Corleone's, though, we can't help recalling the words of Clemenza, as he sagely advised his hit man after a particularly nasty piece of business. "Leave the gun," he told him. "Take the cannoli."