Through the miracle of digital audio, loverman D'Angelo makes himself available to his adoring public. 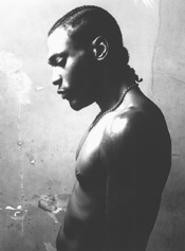 When you're the number-one R&B loverman, it's hard to fit the little things into your life (since you're, you know, sexing up the ladies and doing all that stuff that lovermen do). Little things, like sitting down for 15 minutes for an interview to promote your new album -- your crucial second album and your first in five years -- not to mention a national tour. But D'Angelo is a busy guy. And Voodoo's a hot album, so we're stuck with a set of interview discs provided by the loverman's publicist to help us better understand what makes D'Angelo tick. And if few of our questions were adequately answered (like, what's up with sounding so damn much like Prince?), we do get to know the Artist Still Known as D'Angelo through such stock quotes as "I always knew that this is what I was going to do. Music was always my priority. I knew it was going to be my thing."

Perhaps more than any artist of the new crop of neo-soul hipsters, D'Angelo seems to feel the music. He sounds like he's been marinated in the classic soul of Marvin Gaye and Curtis Mayfield, and even occasionally the psychedelic blues of Jimi Hendrix (Voodoo was recorded at Electric Ladyland, Hendrix's old stomping ground). Of course, it often gives his music -- found on his 1995 debut, Brown Sugar, and in the soul-jam crawlers of Voodoo -- a slightly familiar vibe, like you've maybe heard this stuff someplace before. "I feel very glad to be mentioned in the same breath, because these are my idols," D'Angelo says of the comparisons to Gaye and Mayfield. "But it confirms that maybe I'm doing the right thing. I love and respect each and every one of those guys."

On Mayfield, D'Angelo resorts to the usual platitudes in reference to the Rock Hall inductee.

"Curtis Mayfield's legacy will live forever," he says. "He was the first person to ever sing songs about consciousness and awareness for black folks. He was a very honest songwriter and a big influence on me. He was romantic and he was street and he was gospel at the same time. A lot of what he was about I try to incorporate into what I do."

On Prince (with whom he once did a song onstage, after being called up by the washed-up symbol dude when he was spotted in the audience), he's equally kind.

"We really didn't talk that much," he says. "He asked me what song I wanted to do, and I picked my favorite song -- "Ballad of Dorothy Parker.' At first, he didn't want to do it, but I was like "Yo, I gotta do that. That's the one.' And that was that. We really didn't say much else."

Hmmm. Not quite where we'd want to leave this one, but the discs left us little choice. They did offer another one of D'Angelo's musings on fame: "I didn't expect it," he says of his multiplatinum success. "I kind of, in the back of my mind, hoped for it. It took me awhile to accept it, because it did change my lifestyle. It all happened overnight."

We'll assume that an overnight incident was also responsible for his, um, collaboration with neo-soul sister Angie Stone. They wrote a few songs together for his debut, her debut, and Voodoo. They also made some beautiful music together that produced a son (the two are no longer romantically involved, however). Said offspring is the subject of a few of Voodoo's more spiritual and pensive tracks. "It affects my life," D'Angelo says of fatherhood. "It's changed my life, you know? Whatever is going on in my life, I have to write about. I wrote a lot of songs about me becoming a father. It's influenced me a lot."

While Voodoo's flow is relatively smooth (he sure has earned that "loverman" tag -- sweat and sex just drip from the grooves), one cut, "Left & Right," features rappers Method Man and Redman addressing on the sweet juices of love in less poetic terms. While Meth and Red deserve props, their Voodoo collaboration with D'Angelo fits in about as well as, say, Ol' Dirty Bastard would with Built to Spill. Had we had the chance to chat with D'Angelo, we would have asked, What motivated you to collaborate with a couple of hardcore rappers? Instead, we settle for his response on the interview disc: "I'm a big fan of both of them, and it was great to have them on it."

Lauryn Hill was also supposed to be on it (D'Angelo chipped in some vocals on "Nothing Even Matters" from The Miseducation of Lauryn Hill), but the cover of Roberta Flack's "Feel Like Makin' Love" is instead a solo performance. How did that happen? Was Hill too busy for the busy loverman? Our set of interview discs only gave us yet another please-all quote about D'Angelo's love for old R&B ("It's more fun for me than anything, because I love songs. All I do is listen to old music"). And he sort of explains why he chose the song ("I just wanted to put a new twist on it"). So we'll just assume that some kind of legal bullshit prevented them from collaborating here.

No lawyers and paperwork, however, got in the way of D'Angelo taking off his clothes and showing off his buff, nearly naked torso in the video for Voodoo's first single, "Untitled (How Does It Feel)." As a loverman, it's a pretty smooth move. But will we respect him as an artist in the morning?

"The concept is really just me and the song," he says. "When I look at the video now, it kind of looks sexual, but when I was doing it, I wasn't really in that head frame. It was really more of a spiritual thing for me."

Unlike Brown Sugar, on which D'Angelo was responsible for quite a bit of the instrumental work, Voodoo has a more organic sound, which is a result of the songs being recorded in full takes with very few overdubs. (Although he does still play drums, keyboards, guitar, and bass throughout -- we're not quite sure how this is possible and didn't have the chance to ask him ourselves.) Voodoo is indeed more basic than its predecessor, D'Angelo confirms in the interview discs. Songs were worked up on the spot, he says, and "This album is like a demo. A lot of the stuff is live, and it's the first take. A lot of what you hearing is just us up in here grooving."

Our follow-up question on the subject was never answered. The disc was over. And so, apparently, was our interview.