The brain behind WMMS' rise and fall reminisces about Cleveland rock and roll. 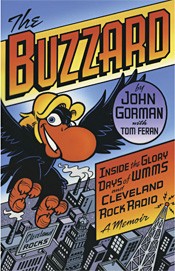 For 13 years, John Gorman lurked quietly behind the scenes as the music-programming architect who turned a neglected FM-radio station into an influential broadcasting blowtorch. He's breaking his silence at today's Local Author & Book Fair in Shaker Heights, where he'll sign copies of The Buzzard: Inside the Glory Days of WMMS and Cleveland Rock Radio. "When I came to Cleveland, [WMMS] was being held together with chewing gum, staples, and rubber bands. It was left with virtually no staff, and it was on the verge of turning into a country station," says Gorman, a Boston native who started his career running a pirate-radio station in his parents' attic in the early '60s. "We wanted to be a pop-culture pioneer." In his 289-page memoir, Gorman chronicles the station's colorful history between 1973 and 1986, from its beginnings as a small cluttered studio without air-conditioning to its emergence as Cleveland's top-rated broadcaster of album rock. He name-drops longtime jocks like Kid Leo, Len "Boom" Goldberg, and Jeff & Flash. And he revels in off-air stories about events that made fellow broadcasters across the country take notice. "I was reliving all the emotions: the highs and the lows," says Gorman. "The idea was to capture the flavor of the station without turning it into War and Peace."Take the "strange incident" when the late Beach Boy Dennis Wilson suddenly burst into tears after DJ Murray Saul's yelling reminded him of his troubled relationship with his tyrannical dad. The meltdown shattered Gorman's impression of the group as "this all-American band." "It was just the opposite. Dennis lived a pretty crazy, on-the-edge life," says Gorman. "He was a genius, but he also had a destructive edge. He was his own worst enemy."As the station began its meteoric rise in the mid-'70s, it was heralded as a risk-taker that spun tunes by unknown bands. Fleetwood Mac still gives credit for its superstardom to Gorman and crew, who got hold of the quintet's first live concert album with a version of "Rhiannon" on it. "Suddenly, it became the most requested tune on the station," says Gorman. "Then Rumours came out, and it was like, bam!"By the time Gorman and 12 other staffers resigned in 1986 to help launch crosstown rival WNCX-FM, the station was enjoying its highest ratings. Gorman also started a radio consulting firm, whose client base now spans from New York to Los Angeles. Still, he relishes his time at the Buzzard. "It becomes easy to become intoxicated with success. And I put my ass on the line with every decision," says Gorman. "But we never believed in our own hype. That's how we were." Gorman reads and signs the book from 1 to 5 today at Shaker Heights Public Library, 16500 Van Aken Boulevard in Shaker Heights. Admission is free. Call 216-991-2030 or visit www.shakerlibrary.org.
Sun., Nov. 18, 1-5 p.m., 2007