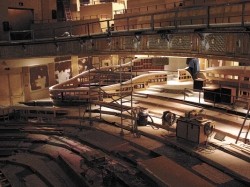 In their fall runs for both box-office and critical roses, local theaters seem to be splitting their programming bets between proven champions and neophyte maidens. (In the-sport-of-kings parlance, "maiden" is the term for either a filly or colt who has yet to win a race.) It's the old warhorses, however, who by far outnumber the newcomers answering the call to the post.

Of course, reliable veterans are to be expected from the classical repertory of Great Lakes Theater Festival, and, not surprisingly, for the season's most anticipated opening, the company will be depending on a stalwart with a pretty fair track record. To christen the September 24 reopening of the completely renovated Hanna - now its permanent home - GLTF is laying its money on Willie the Shake's tragedy, Macbeth. Originally scheduled to tackle the title role, Andrew May has encountered a disabling physical problem and has been replaced by Dougfred Miller, with Laura Perrotta as his bitchy Lady. The production is further said to be reframed as a Japanese samurai epic and will run in repertory through November 8 with Stephen Sondheim's brooding musical blend of fairy tales and murky psychology, Into the Woods - which may not exactly rate designation as a classic, but at least has frequently been revived during its 20-year life span. The even more venerable tradition of a holiday visit from A Christmas Carol will return November 28 through December 23.

Not so expected is the Cleveland Play House's mounting of four - tote 'em up, four - consecutive old-timers to inaugurate its '08-'09 campaign. Pretty '70s TV ingenue Linda Purl, now matured into character parts, will essay one of the American drama's great roles, the mother, Amanda, in Tennessee Williams' 1944 The Glass Menagerie, under boss Michael Bloom's direction (September 12-October 5). Next will come the tricky but uproarious '80s British backstage farce Noises Off (October 3-26), to be succeeded by yet another of the seemingly endless revivals of Lorraine Hansberry's half-century-old A Raisin in the Sun (November 7-30). For the holidays, CPH will bring back, for the fourth straight year, young Ralphie's desperate quest for a Red Ryder BB gun in the immensely popular dramatization of the 1983 film A Christmas Story (November 28-December 21).

Joining the "Back to the Future" movement, PlayhouseSquare kicks off its subscription series with the umpteenth replay of 1975's A Chorus Line (October 14-26) and a reprise of its Christmas hit of some years ago, The Radio City Christmas Spectacular, featuring the leggy charms of the Music Hall's famed Rockettes (December 4-28). In between (November 11-23), it offers the recent musical version of the 2001 film comedy Legally Blonde. Beck Center also plays the old-is-new card by initiating its season with a resurrection of its very successful 2005 staging of Urinetown (September 12-October 12) and then makes a much farther reach back for the holidays to come up with the 1955 Mary Martin vehicle, Peter Pan (December 5-January 4) - only, most unusually, this time with an honest-to-gosh boyish male singing "I've Gotta Crow" in the title role.

Among smaller theaters adhering to much the same bent, Ensemble will attempt Edward Albee's iconic and monumentally difficult 1962 classic, Who's Afraid of Virginia Woolf? (September 19-October 5), and Cesear's Forum will stage a similar but considerably later Albee disquisition on the sorrows of wedded lack of bliss, Marriage Play (October 10-November 15). Even tiny convergence-continuum, notorious for its unorthodox bookings, turns to Sam Shepard's 1979 Pulitzer Prize winner Buried Child (September 26-October 25) before revalidating its reputation with an item titled Lord of the Burgeoning Lumber (November 20-December 20), whose publicity description has it sounding like the saga of a pair of Brokeback Mountain cowboys romping through a patch of locoweed.

Naturally, the tunes emanating from Opera Cleveland's ultra-conservative repertory will be ultra-familiar: imperishables like the Countess' "Dove sono" from Mozart's The Marriage of Figaro (September 26-October 4) and "Evening Prayer" from Hansel and Gretel (October 31-November 8) by Engelbert Humperdinck (the original, not the English pop pretender, née Arnold Dorsey). Likewise, instantly recognizable tunes associated with the always-with-us King will resound from November 5 through January 3 at Akron's Carousel Dinner Theatre in All Shook Up, a revue inspired by Elvis Presley hits.

Neighboring Actors' Summit in Hudson will buck the trend with a trio of less-readily identifiable entries: Main Travelled Roads, a 19th-century "romantic musical" (September 18-October 5); Nixon's Nixon, presumably a comic imagining of the prez's last night with Henry Kissinger before his resignation, which proved that those who pray together don't necessarily stay together (October 23-November 9); and Sanders Family Christmas, a nostalgic evocation of the 1941 Christmas Eve soon after the attack on Pearl Harbor.

Also opting for the newer, Karamu will co-produce with Dobama Theatre Caroline, or Change, a musical with book by Tony Kushner, which centers on a Southern Jewish boy's bond with his family's black maid and features among its charms a singing washing machine (September 19-October 12). Another fresh work - Waitin' 2 End Hell, about the twin horrors of marriage and divorce - will follow from Karamu (October 24-November 16) before it returns to its glorious tradition of the holiday celebration of Black Nativity (December 5-28).

The one outfit swimming entirely upriver against the stream of oldies is Cleveland Public Theatre, which boasts a calendar that includes "four world premieres." The first is Goldstar, Ohio, a true story based on interviews with the families of the 22 Brook Park marines (all from the same unit) killed in Iraq (October 16-November 8). Scheduled subsequently is Boom (November 28-December 20), in which, with the end of the world imminent, a female journalism student becomes a fish-tank specimen for a marine biologist; to be succeeded by Crumble (Lay Me Down, Justin Timberlake), wherein a 12-year-old girl's Christmas wish list is largely composed of bomb-making materials (December 4-20). Not to be completely out of the loop, CPT will also toss in its fourth consecutive go-round of The Santaland Diaries, the ubiquitously performed account of the misadventures of a part-time Macy's elf (November 28-December 20).

Whatever - first-timers or warhorses - once you see them run, it shouldn't be that hard to distinguish the thoroughbreds from the nags.