Warped in a Jar

The Rock Hall Honors California punk . . . but how punk is that?

January 24, 2007
comment
Bad Religion, Pennywise, the Bouncing Souls, and Paramore. 7 p.m. January 26, at the Rock and Roll Hall of Fame, One Key Plaza. The event is sold out. Warped: 12 Years of Music, Mayhem, and More. Opening-night party 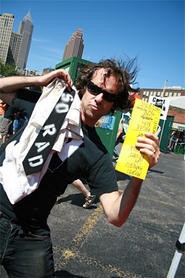 There's a punk party this Friday over at the Rock and Roll Hall of Fame. It's opening night for the new exhibit Warped: 12 Years of Music, Mayhem, and More, and a bunch of bands -- including Bad Religion and Pennywise -- will be rocking out.

The country's longest-running festival tour, Warped has ridden California skate-punk culture straight into the mainstream, showcasing snotty teen idols such as Green Day, NOFX, Rancid, and the Offspring along the way.

And who can forget the skateboarding? With the music cranked, hordes of youth from Cleveland to Calgary have witnessed skate hooligans with Mohicans and tattoos scaling massive half-pipes.

It's a spectacle, for sure, but the culture it milks is definitely not the same wild and unruly underground beast born in the late '70s and early '80s, among the concrete jungles of Los Angeles and the Bay Area. For traditional punk mutineers, the notion of playing a concert at a museum for rock music must seem surreal, to say the absolute least.

"When you take something like skateboarding, surfing, or punk rock music, and you give it tons of exposure, some people might say you can kill the heart of it," says Pennywise vocalist Jim Lindberg. "But I know myself and that most people doing it, they don't care at all about the mainstream. For us, it's about creating music and skating and surfing. It's not something that needs mainstream approval."

Then again, the safe, sunny, and melodic pop-punk of bands like Pennywise (as well as almost every other group to play Warped) feels tailored for mainstream success; the roots of this dynasty, meanwhile, lie in the raw sound of Black Flag, the Circle Jerks, the Dead Kennedys, and the Germs. These were bands that rocked hard and lived hard: anti-establishment, DIY, and fuck all the rest.

"I remember the first time I saw a skater in Thrasher magazine wearing a Black Flag T-shirt, and I just shit my pants," recalls Bad Religion bassist and co-founder Jay Bentley, phoning from his home in Vancouver. "Someone else gets it. Someone else is hearing it. When we used to go to punk-rock shows like Black Flag in L.A., there was only maybe 200 people that ever really kept going to all the shows. Skateboarding was the first culture that everyone embraced outside of music. There were a lot of skate parks in L.A. at the time, and so we just started putting on concerts. It just kind of evolved into this whole Southern California surf, skate, punk-rock scene."

But here's the thing: Bentley's band, however iconic, didn't adopt its heroes' love for heavy, aggressive sounds (see Black Flag's Damaged and My War). Instead, Bad Religion followed the lead of another SoCal outfit, the Descendents, who added melodious harmonies to their skate-punk and peppy hardcore; think of them as Black Flag meets the Beach Boys. And from Bad Religion came the "punk revival" of the '90s and beyond: Green Day, Rancid, NOFX, the Offspring, and even Blink-182.

"People are always ready to say punk is dead, but I think the Warped Tour has done more than anything to keep it alive," says Lindberg. "I think a lot of people wrote it off. Oh, that's where the extreme sports guys and those pierced kids go running around. I don't think a lot of them got it -- as in a sense that it was a really good thing for the punk-rock community, and it made the scene healthy again."

Whether or not you believe punks should be healthy and playing museum concerts that start at 7 p.m., the success of the tour can't help but make you smirk. Just don't be fooled by the jailhouse tats and nipple rings; outside of Bad Religion, maybe, none of these bands even comes close to embodying the violent angst and sonic rage of classic California punk -- whether they're on the Warped Tour or not.

And while Bentley can say, "I never saw myself even going to the Rock and Roll Hall of Fame, let alone playing it," he shouldn't act too surprised. What he and his buddies deal in is a warm and fuzzy imitation of a sound and attitude that died a long time ago -- before the end of Reagan's second term. So you'd hope that on Friday night, Bentley gives a shout out to Black Flag and all his other heroes, because chances are the Hall will never honor -- much less enshrine -- the original California skate punks.