Daniel Tosh is funny onstage; on beaches, not so much. 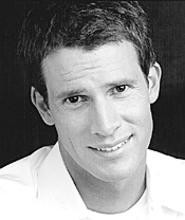 When he's not telling jokes onstage, Daniel Tosh can usually be found riding the waves. And of the two, he'd rather be surfing. "But stand-up pays much better," he says. "So like most artists, I go where the money's at." His job takes him away from his California home and into clubs around the world. But there are drawbacks, he admits. Like "having to do a lot of morning radio," he sighs. "That's probably the worst."

When performing, Tosh has a simple objective: "I try to say something that hasn't been said too many times before. I try to make it as weird and absurd as possible. There's not a lot of truth in my stand-up. My life is boring enough to live. I don't want to retell it every night onstage."

Jason Petty first portrayed country legend Hank Williams in Lost Highway, which premiered at the Cleveland Play House in 2002 before moving to New York City's Theatre District. Petty's reprising the role in Hank and My Honky Tonk Heroes, a show-length monologue with full-band performances of songs that Williams performed and inspired. "This is a history and overview of country and pop music, from Hank's perspective," explains Petty. "I talk about his life -- his broken marriage, him getting a record deal, and his untimely death. His influence continues to this day. He influenced Elvis Presley, Alan Jackson, and Waylon Jennings. We perform songs by all of them." A Southern-style pre-show dinner will be served 90 minutes prior to Wednesday's 8 p.m. show at the Beachland Ballroom, 15711 Waterloo Road. Tickets are $22, $20 in advance (the grub is an additional $15); call 216-383-1124. -- D.X. Ferris

Virgil Wilson couldn't believe his eyes when he saw the Naked Sushi Experience on CSI. In an episode set inside a Vegas nightclub, masked models with fig leaves covering their private parts reclined on the bar and let diners pick sake rolls off their bodies. If it can work in Sin City, thought Wilson, it could definitely be a "conversation piece" in Cleveland. "I don't want people to think it's a strip-club kinda thing, because it's not like you take your mouth and lick it off," says Wilson. "It's sorta like performance art." Go eat raw fish off a naked lady at 8 p.m. Thursday at the Velvet Dog, 1280 West 6th Street. Tickets are $20; call 216-406-6325. -- Cris Glaser

A plant that manufactures prosthetic limbs is the setting of Apply Within: Office of the President Available, playwright Perren Hedderson's one-man show in Cleveland Public Theatre's Big [Box] series. In it, he dishes on the ins and outs of corporate ladder-climbing and chronicles the imminent downfall of a once-thriving company. It's at CPT's James Levin Theatre (6415 Detroit Avenue) at 8 p.m. Friday and Saturday and 3 p.m. Sunday. Tickets are $10; call 216-631-2727. -- Michael Gallucci