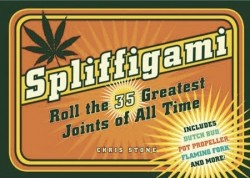 The existence of a book called Spliffigami (Ten Speed Press, 128 pp., paper, 2008) is evidence that it's too easy these days to lay out books and print them on dead trees. Author Chris Stone (really?) doesn't even seem to be attempting humor with his manual on how to roll joints using multiple papers, twisting and folding them into elaborate shapes including, but not limited to, forks and flowers. No, he's serious, as his history of the rolling paper indicates: "The original rolling papers date back to sixteenth century France, when the Lacroix firm, forerunner to Rizla, was founded. In 1796 Lacroix sealed a deal with Napolean Bonaparte to supply rolling papers to the French Military … and the rolling paper business never looked back."

Stone tells all you ever needed to know about rolling complicated joints, from using the gummed strip to reinforce seams and patch leaks, to mixing in different kinds of leaves. He's rated every joint-rolling technique described herein according to its duration, smoothness, uniqueness of the shape and potency. Beginning with the basics, he first describes the rolling of a standard J, using a dollar bill. Soon he's directing nimble-fingered stoners to integrate cardboard and drinking straws to make smoke-able pirate ships and model airplanes. There are also observations of smoking etiquette and a glossary.

The Official High Times Pot Smoker's Handbook (Chronicle Books, 208 pp., paper, 2008) is one of those introductory surveys that tells you a little bit of everything, so that if you happen to walk into a smoke-filled room, you don't feel left out of the conversation. Working with the editors of High Times magazine, author David Bienenstock has put together an engaging mix of facts, funnies, how-to and cultural observation that would make for what teachers and counselors call a "well-rounded student." A few examples: biographical info on High Times founder Tom Forcade and other famous smokers, economic data on the nation's No. 1 cash crop, guides to etiquette, cultivation, joint rolling and dealing with dealers, a bunch of recipes for baking (food products), lists of famous songs about pot, legal tips and much more. As books about pot go, this one is pretty kind.

Robin Cooper's The Timewaster Letters (Chicago Review Press, 192 pp., paper, 2008) shows that good shtick can endure repeated applications. In the manner of Ashtabula native Don Novello's The Lazlo Letters (and several subsequent books), Cooper (a pseudonym used by British comedy writer Robert Popper) writes absurd letters to administrators of all kinds of companies, from Madame Tussaud's Wax Museum (he inquires about having a wax likeness of himself made for exhibit) to the Aluminum Foil Container Manufacturers Association (seeking sponsorship for his poetic abilities, as evidenced by lyrics about the business of making aluminum foil containers, sung to the tune of "Oh My Darling, Clementine"). At his best, Cooper shares with Novello a skill at sucking in the polite public-affairs offices and coaxing from them serious responses; he's very good at the pose of the earnestly inept. Not quite as funny is when he types an intentional and significant mistake (like 10,000 British pounds, as opposed to $10) and feigns ignorance when the correspondent reacts to the absurdity.