With plenty of gore and even more bore, House of Wax can't hold a candle to the original. 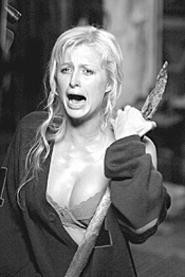 The new House of Wax -- a remake, pretty much in name only, of the 1953 Vincent Price movie (itself a remake of a 1933 film) -- manages to be gruesome and grisly, but it falls well short of being truly creepy, much less terrifying. Horror aficionados expecting the chills that Asian filmmakers like Hideo Nakata (Ringu) and Takashi Shimizu (Ju-On) are so adept at providing will be disappointed. On the other hand, anybody here to catch a glimpse of Paris Hilton in lingerie will get what they pay for.

Nothing seems out of the ordinary, save for a disgusting smell that emanates from the woods whenever the wind blows and an unsettling run-in with an unseen truck driver, who roars up to the campsite in a threatening manner. The next morning, while Wade is trying to figure out why his car's new fan belt has seemingly snapped, Carly and Paige track the source of the foul odor to an open pit filled with dead animals. A dirt-covered, half-witted backwoodsman drives up and dumps more animals -- apparently roadkill -- onto the pile.

The man offers to drive Wade and Carly to the nearest town for help and -- only in a teen horror film would this happen -- they accept. Paige and the others decide to head off to the football game in Blake's car.

Wade and Carly are dropped off near the run-down rural town of Ambrose. While waiting for the gas-station manager to return, they visit the town's one tourist spot -- Trudy's House of Wax, where the wax figures inside look uncannily lifelike.

Only after Bo (Brian Van Holt), the gas-station owner, drives the young couple up to his house to retrieve a fan belt for their car -- and Wade goes inside the house, never to return -- does Carly realize that Bo is the mysterious truck driver from the previous night. From there on out, it's each dimwitted character for him- or herself.

House of Wax has a few generic scary bits, but nothing out of the ordinary and nothing really clever, save for the fact that the wax museum itself -- the building, the stairs, and most of the interior furnishings -- is theoretically made of wax. While the backstory (glimpsed in a highly disturbing, increasingly violent epilogue in which the camera reveals only the torsos of the characters) plants a seed of psychological terror, the rest of the film fails to expand on it.

Even more damaging, House of Wax lacks any real sense of drama -- psychological or otherwise -- which results in a noticeable absence of tension and suspense. One reason is that the various psychological threads of the story are not pursued; another is that the audience never develops strong feelings for any of the characters -- nor do the characters seem to care about one another all that much.

As in so many horror films, the characters do things that rational human beings would not: They split up, even though they know there's a psychopath out there; they enter a house that nobody in her right mind would step into. (Compare the terrifying The Ring to the disappointing Ring 2, in which Naomi Watts' character leaves her son with a stranger to return to her possessed house to pack a bag. Don't think so!)

A real person would be scared witless to find herself in Carly's predicament, but it's not until almost the end of the film that she finally seems appropriately terrified. And her realization that everybody in the town is made of wax seemingly comes out of nowhere; at least, we never see her piece it all together. While some of the early special effects are fine, the film's major set piece is notably fake-looking.

The best horror movies -- Invasion of the Body Snatchers, Eyes Without a Face, Alien -- have a strong psychological component, present characters the audience can identify with, and convey real emotions. House of Wax fails on all three counts, as do most of the horror films made in America today. But teens who want to be scared but not too scared or boys who want to ogle Paris Hilton could do worse. Perhaps the biggest surprise here is that Hilton isn't atrocious. Not that she's good, but she's certainly no worse than anybody else in the film.