After years of being compared to Pavement, Silkworm shows signs of creating its own sound with Lifestyle. 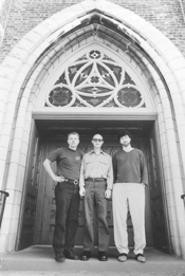 When drummer Michael Dahlquist first met the members of Silkworm -- singer-bassist Tim Midgett, singer-guitarist Andy Cohen, and singer-guitarist Joel Phelps -- more than 10 years ago, the Missoula, Montana outfit was touring with a drum machine called Lurch that it used in place of original drummer Ben Koostra, who had recently left the group. At the time, the band had only self-released two cassettes, Advantage (1987) and Girl Harbor (1989), but Dahlquist sensed that his own band, the Olympia, Washington-based Dungpump (he describes it as "a Dinosaur, Jr. thing"), wasn't heading anywhere and decided to join Silkworm.

"We were all very young," he recalls via phone while taking a break from his day job as a product manager at a software company in Seattle. "Andy was 18. When we played bars he had to sit outside until it was time to go onstage. Andy, Tim, and Joel came here with a drum machine, and they somehow hooked up with this guy who was managing my brother's band. It's not a very thrilling story. I saw them and thought they were really fun. They needed a drummer, so I started playing drums, and I was a terrible drummer. But I was good enough, and we got along well enough. Ben [Koostra] was the best drummer in the world. He wasn't a rock drummer; he was a jazz drummer. But God, he was good. There's no way I could play like him, even now."

Despite such a shaky start, it wasn't long before Silkworm, which relocated to Seattle when Dahlquist joined the group, started upon a prolific recording career, releasing its first full-length, Lajre, in 1992 on the indie imprint Temporary Freedom and following it up with a series of 7-inches and LPs for a variety of small labels. Even when Phelps left to pursue a solo career in 1994, the band carried on, helped no doubt by the fact that it had aligned itself with producer Steve Albini (Nirvana, Bush, PJ Harvey), who continues to engineer the group's records.

"It's hard to say how [our experience with Albini] compares to other people's experiences," Dahlquist says. "He likes our music, so he's excited to make it better. But he's extremely light-handed and makes recommendations and leaves it at that. If he thinks a take is good, and we think it sucks, he'll back down. There's no question that we have the final say. Like he's said many times, he has no interest in being a producer. Even with the people he feels comfortable with, he backs out if he finds himself getting into that position. It's hard to say what we'd gain, not working with him."

Regrouping as a trio after Phelps's departure, Silkworm signed with Matador Records in 1996 and released Firewater, an album that showed how the band's songwriting abilities had matured. At the time, Matador was renowned for breaking indie rock acts, and by the time of Firewater's follow-up, 1997's Developer, there was even some talk that Silkworm would follow in the footsteps of other indie rock acts who had signed with major labels. Instead, Matador, which had signed a short-lived distribution deal with Capitol, decided not to renew the band's contract after fulfilling its two-record deal and sent the band packing after issuing the retrospective Even a Blind Chicken Finds the Kernel Now and Then in 1998.

"Matador had a two-record contract with us, and they weren't making their sales quotas," Dahlquist says. "They were spending a ton of money on our records, and we knew they weren't going to get their money back. They were also getting a lot of grief from Capitol about their budget. At that point, they were putting out records they liked by people they liked, and Capitol wasn't too happy about it."

It's likely that part of the problem, at least from Capitol's point of view, was that Silkworm had always operated in the shadow of Pavement, a band that, despite being critics' darlings, never broke though to the mainstream. It didn't help matters that Dahlquist, Midgett, and Cohen also play with Pavement singer Stephen Malkmus in a side project called the Crust Brothers. On the band's new album, Lifestyle, its second for the Chicago-based indie Touch and Go Records, Silkworm still tends to sound derivative of Pavement. The songs "Slave Wages," " Dead Air," "Raging Bull," and "Treat the New Guy Right" have lackadaisical vocals and obtuse lyrics that recall Malkmus. Even "Around the Outline," a track that features Dahlquist on lead vocals for the first time, finds the band hovering around Pavement's airspace.

"I don't get offended, because I think Pavement is a great band," Dahlquist says of the comparisons. "I do think that there are dramatic differences between the bands. I think the overall music concepts are similar, in that Pavement doesn't stick to a particular genre and can play something that is really out there or not. They're also very loose in a way that we're not. Even their songs that are two minutes long are these weird, warbling, bizarre things, whereas our songs that are two minutes long are these precise little punk rock things. None of us are trained vocalists or anything like that, but the seemingly meaningful but fairly obtuse lyrics and vocal lines that tend to wander around a central melody without sticking to it are similar."

To its credit, Silkworm shows signs of developing a different, more unique sound on Lifestyle. Keyboardist Brett Grossman adds piano and organ to several songs, and tracks such as the nearly acoustic "Roots" and the bluesy, Neil Young-like "That's Entertainment" have more in common with such American songwriters as Bob Dylan and Tom Petty, both of whom Silkworm has covered in the past. "Yr Web" starts with stuttering vocals, but quickly turns into a blues jam, and "Plain" even features a guitar solo, which is nearly unheard of in the pantheon of indie rock, where it's cooler to thrash aimlessly than to play something as precise as a solo.

"It's fun to open up the music and give it a different vibe -- kinda honky-tonk or bluesy," Dahlquist says of Lifestyle. "It's a hard thing to say how this record is different. The way we work, we will put out a record, tour, and then get together and put out another record. There's no particular departure. I do think we're embracing the -- not so much classic rock -- but the bluesy classic rock sound. Not that it's blues, but it has more of a relaxed sound, and I think it's becoming more and more clear what kind of rock and roll we want to play."

While all the members of Silkworm once worked as cabdrivers -- "I don't know if any songs came out of that," Dahlquist says, "but it inspired some great stories, and you get to know your way around town" -- to support their musical lifestyles, they've since started to explore different options (Cohen is in law school in Chicago, and Midgett is finishing a degree in electrical engineering at the University of Washington). Dahlquist says the band has a realistic view about its future -- it's not banking on selling truckloads of records or selling out arenas at any point.

"There was a time when people were filling our ears with the possibilities [of mainstream success], but my feeling now is that our level of popularity, which is now at a pretty comfortable level, is basically what we've got," he says. "We all have careers outside of music, so it's not a bad life."

And you can forget about Dahlquist doing any endorsements for the software company where he's employed.

"I have this fear that at some point someone here will think it's cool that I'm in a touring rock band, and they will publicize it on our company website," he admits. "All the sale folks will come out, and it will be horribly embarrassing. I'm trying to avoid that fate as much as possible."