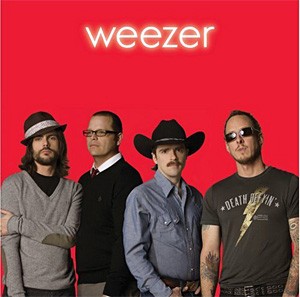 On Weezer's sixth album — the third that the band has named after itself — frontman Rivers Cuomo follows the pattern he laid out on 1994's debut and the 2001 outing (more commonly known as the Blue Album and the Green Album, respectively). The latest Weezer — the Red Album — features similar cover art of the guys standing beneath their moniker and in front of a simple color-coded backdrop. But this time around, Cuomo adds a bit of spark to the pic, sporting a mustache and cowboy hat. The CD's cover isn't the only place he dresses up. In "The Greatest Man That Ever Lived," Weezer leapfrogs through 11 genres, including glam rock, hip-hop, and spoken word. "Pork and Beans" pulses with power chords and a shout-out to Timbaland. And "Heart Songs" name-checks everyone from Eddie Rabbitt to Debbie Gibson. But Cuomo stumbles midway, never achieving the Green Album's quirky pop or the harder guitar blasts of 2002's Maladroit. But the Red Album's first half is nerd rock at its best.