Weirdest Movie in the World

June 09, 2004
comment
The Saddest Music in the World The Cedar Lee Theatre 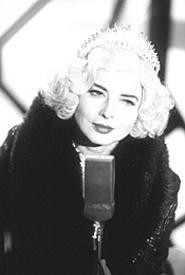 Ah, the peculiar genius that is Guy Maddin. Who else but the morose Canadian director, born and raised in one of the coldest cities in the world, would marry silent film, 1930s movie musicals, Prohibition, family melodrama, critique of capitalist zeal, and monster-movie gore in a surreal montage about sorrow that is, at times, hilarious? Nobody.

First, sheer pragmatism: This is not a mainstream film. It will not, that is to say, allow you to lean back in your seat and release your brain from duty till it's time to recall where you parked. On the contrary, The Saddest Music in the World requires nearly constant attention, perception, and consideration.

For starters, it is shot almost entirely in black and white, with purposefully distressed frames that blur at the edges. There's very little by way of lighting. The atmosphere is one of dark, crowded interiority -- even in the exteriors, which are obvious sets meant to appear cheesy and false. Images are frequently superimposed upon one another or presented in collage. The surreal gist is of something happening inside somebody else's brain, perhaps as a dream -- or a nightmare -- to which you've been granted access. If that weren't enough to send you quaking into never-before-experienced movie territory, consider the dialogue. Every few minutes, somebody says something incomprehensible, as when Narcissa (played by the stunning Maria de Medeiros) refers to a talking "tapeworm," apparently living inside her body, which offers reliable advice.

Still, there's plenty to cling to here. Challenge us though it may, The Saddest Music actually harks back to the conventions of classic film genres, and combines or juxtaposes them, more than it creates something new. That's why it feels familiar -- almost achingly so, as though we've seen it before but can't quite place where. In addition to the cinematic allusions, Maddin gives us a narrative, five central characters who are mostly (if not entirely) developed, and a consistent, jolly sense of gallows humor. In short, it's a rich, artful film, slightly overlong but worth the time, money, and energy required to get through it. Art? Definitely. Entertainment? Not so much.

Meanwhile, the plot. The narrative is hardly laid bare; you'll have to do some work to piece it together. Elementally, it goes like this: It's 1933 in Winnipeg, a frigid place with a morbid vibe, proud to claim the title of "the World Capital of Sorrow in the Great Depression." Brewery owner Lady Port-Huntley (Isabella Rossellini), a blond ice queen in a tiara, announces a contest to determine the saddest music in the world. (Her motivation: to induce even more depression, which leads to the consumption of beer.) In pursuit of the $25,000 reward, delegations arrive from all corners of the world, competing with dirges and laments to beat the band.

The competition pits kin against kin, as failed Broadway impresario Chester Kent (Mark McKinney), representing the United States, battles both his Canadian father (David Fox) and his estranged brother, Roderick (Ross McMillan), representing Serbia (and carrying the collective weight of its sorrows on his black shoulders). Meanwhile, the grim details of the family's history emerge. Chester and his father are embroiled in a love triangle with Lady Port-Huntley, who lost both legs (instead of merely the one that was trapped beneath the car) to the father's drunkenly misguided surgical saw. Prodigal Roderick, besotted with grief over his own loss, carries his dead son's heart in a jar of his own tears. He is also wifeless: After their son died, the good woman fled in grief. For this family, times are not good.

Chester, the American, is oblivious. For the contest, both his Canadian father and "Serbian" brother offer up their private, dark lamentations, wringing sorrowful music directly from their grief-laden souls. Chester, on the other hand, does Broadway. Charming members of other delegations into his cast, he mounts increasingly impressive production numbers with a huckster's showmanship reminiscent of P.T. Barnum or maybe Andrew Lloyd Webber. The joke is that the perennially chipper American will not be undone; he will not sink deeply enough into his own psyche to feel his pain and can therefore represent sadness only with dancing girls and fake snow. (Remarkably -- perhaps shamefully -- his numbers are not without their effects.) Clearly, Maddin has something to say about crass American notions of emotional depth, and if you feel a twinge, you're a sucker. Even the amnesia-plagued Narcissa, who relies on the talking tapeworm for direction, disavows the cheery nationality: "I'm not American. I'm a nymphomaniac."

The Saddest Music in the World is not for viewers with a short attention span. In the final third, it lags morosely, taking too long to make its point. (One senses a single, lachrymal note on a cello, played again and again.) It's also so busy being strange that real sorrow (or emotion of any kind) remains elusive, with the possible exception of de Medeiros and her gorgeous, grieving eyes. The film is about grief (and the Mexicans, who wail of a mother's love for her dead child, have certainly got a handle on that), but its self-conscious artifice gets in the way of its pathos, so that one leaves more chilled than warmed. On the other hand, it's unique. You may not quite enjoy it, but chances are that you won't soon forget it either.