After a stint with the majors, Mushroomhead regroups and reloads. 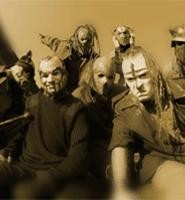 Inside the cardboard box, the members of Mushroomhead stand alone, masked men surrounded by a black-and-white nightmare maelstrom. Flanked by a giant iconic evil face and an oversized pumpkin, Mushroomhead drummer-producer Skinny drops the shipment on a leather couch in the band's headquarters, tears it open, and passes out the limited editions of the group's new release, its fifth full album, Savior Sorrow. The new CDs make today better than Christmas and almost as good as Halloween.

"How do you beat the game today, as far as [competing with] the internet?" asks Skinny, pouring a big cup of coffee and basking in the reflection coming from the shiny slipcases. "Packaging."

Mushroomhead's previous album was the only one the band has recorded for Universal, the largest major label, but this one looks better. Skinny and programmer/multimedia-assassin Stitch created the CD's holographic cover and 16-page foldout booklet during 12-hour shifts. And some corporate entities still believe in the group: Best Buy and the band's new label, independent foundry Megaforce, partnered in a limited run, giving the members intricately embellished solo shots on 5,000 covers apiece.

These guys are used to beating the game. 2001's XX collection was well in the black before Universal licensed it. Two years later, XIII cracked Billboard's Top 40 album chart and sold 186,000 copies in the U.S. and double that figure worldwide. Moving 11,000 copies in Cleveland alone, it's the city's best-selling rock export since Filter. Still, it didn't match Universal's expectations, so the recording giant cut the band loose.

Skinny isn't bitter; in fact, he's grateful. "They said, quote-unquote, 'We don't know what to do with you. You're not a metal band. You're not a rock band.'"

"Universal had a shitload of cash," adds Pig Benis, the bassist with a Gwar-worthy stage name, who recently resumed wearing a pig mask onstage. "And then they weren't giving it to us anymore. And then you're in Arizona, and you have to make your way back home. And we did it."

Cleveland was glad to have them back. While it lasted, some of the Universal money went into the group's North Royalton compound, Filthy Hands Studios. Three years ago, it looked like the den of post-apocalyptic road warriors. A few dollars and more elbow grease have since turned it into a finished studio, with a big-screen TV, loaded Macintoshes, and oversized props from the band's famous Halloween shows. Thirteen years after the band debuted as a side project for members of metal bands Purgatory and Hatrix, Mushroomhead is a full-time job for all seven members.

Of course there's one noteworthy change. Shortly after the mid-2004 split with Universal, co-frontman J. Mann left. The group recruited singer Waylon of the North Carolina metal group 3 Quarters Dead, who had impressed Skinny when it recorded at Filthy Hands. Waylon isn't present today (nor is frontman Jeffrey Nothing), but as the new guy, he's still subject to a certain amount of hazing. But the past two years have more than proved his commitment; a recent divorce severed the last tie to his former life.

Mushroomhead's also moving on. Renowned as much for their presentation as their music, the band members have adopted a new look for the new disc. Their twisted, cracked new faces make them look as if the camouflaged commando squad from the XIII era died, went to hell, and returned, Spawn-like. The self-produced album is squarely a sequel to its predecessor's focused art-metal.

Waylon doesn't quite match Mann's dog-on-a-leash fury, and he doesn't rap, but he's the first member of the group to really sing on record, and he pushes Nothing with warped harmonies on blues-metal bleeders such as "Cut Me." Guitarist Gravy's long-simmering penchant for lumpy stoner-rock riffs finally boils over. Stitch -- perhaps the least superfluous DJ-programmer in rock -- combines with Skinny to concoct a dark electronica eerier than Erie in November. If Mike Patton's name were on Savior Sorrow, the hard-rock community would slobber all over it.

Savior arrives this week, but leadoff single "Simple Survival" has already roundly thrashed the multiplatinum radio-rock group Evanescence on the call-in voter show Cockfight on New York City's KRQR. As Korn, Disturbed, and even Cleveland's Switched revive flagging careers, there's still no telling whether the disc will catch fire with young metal fans. Savior certainly doesn't fit any popular formulas, but Skinny says that behind the masks and costumes, the group is twice as real as any white-belt screamo band.

Followed by Chicago, Cleveland remains the band's biggest market, and its hometown also boasts the most former supporters. Many disillusioned fans who once stalked the Flats in face paint and jumpsuits still haven't forgiven the group for moving beyond its early free-form hybrid of industrial rock, rap, and metal. Skinny says the band never took itself as seriously as diehard Mushroomheads do.

"The whole point of the band [initially], as a side project, was just to fuck around," says Skinny. "And create and have fun, and to try different things. Our material's never been the same, even from song to song. If we put out six albums of the same thing, would we still have careers? Change is inevitable."

He hopes that the fans who come out only for old-school shows will give the album a chance; if they don't, he still appreciates the support they've given the band.

"If it weren't for Cleveland, we wouldn't have been able to do shit," Skinny says. "We know where we come from. We're not going away. What the fuck else can we do?"