We'll Drink to That 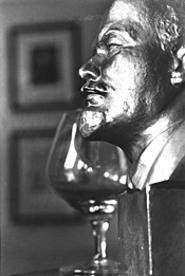 Intimate, dimly lit, and all done up in burgundy, black, and brushed aluminum, the little martini bar's cool, stylish vibe is tempered by Giamora's friendly presence. He'll have a staffer take your coat. He'll pause to ask your name. He may even whip up some complimentary canapés -- simple but surprisingly tasty tidbits, such as Triscuits topped with his secret combination of chili sauce, cheese, and creamy crab salad, perhaps -- as he did on the Friday night we visited.

As for the martini menu, it's a collection of colorful concoctions crafted from top-shelf gins, specialty vodkas, heady liqueurs, and fresh fruit juices. The velvety Coffee Lover's martini ($9), for instance, was a smooth brew of vodka, Kahlua, Frangelico, Godiva Cappuccino Liqueur, and cream; while a manly Bombay Sapphire gin martini ($11) with three blue-cheese-stuffed olives (plus the two additional ones that Giamora brought, after seeing us scarf down the first batch) put a companion in just the right mood for some serious TGIFing. (There's also a selection of wines and beer, for those so inclined.)

Numbers game . . . Our only disappointment at Hamilton's was that no one knew how to make a French 75, that sassy pour of champagne, gin, lemon, and simple syrup that's becoming a fave among local hipsters. For that, we'll still have to scoot into the Velvet Tango Room, where it's practically a signature, or into 806 (806 Literary Road, 216-696-4806), where it's one of a host of champagne-based cocktails on bar manager Jody Manning's winter martini menu. (Others include Dave's Love Potion #9, a sexy sounding ménage à trois of champagne, cognac, and Grand Marnier, served over ice, and Melanie's Starry Night Tale, with Stoli Raz, Chambord, fresh lime, and bubbly.)

Hey, what's your hurry? . . . As Giamora observes, the best way to experience a martini bar is as part of what suburban folks call "a night on the town." For whatever reasons ("crappy weather" springs to mind, of course, as does the lack of a taxi-taking culture), Greater Clevelanders tend to treat a visit to the big city as a covert operation, pulling the Hummer into the closest parking spot, diving into their targeted destination, and then dashing straight home afterward to catch America's Most Wanted. Consider, in contrast, this suggested itinerary. Step 1: Pre-dinner cocktails, perhaps at 806, Hamilton's, Circo/Zibibbo, or Century at the Ritz. Step 2: Dinner, maybe at Theory, Star, The Metropolitan, or Sans Souci. Step 3: Entertainment at such spots as Hilarities, Playhouse Square, or Cleveland Public Theater, and/or some Warehouse District clubbing. Finally, Step 4: Nightcaps, at any of the places you missed in Step 1. Hell, with the brain drain and all, just think of it as practice for when you move to Chicago or New York.

Sliced . . . "Decent Pizza" apparently wasn't good enough for Coventry: David Cameron's casual sit-down pizzeria at the corner of Coventry Avenue and Mayfield Road is locked up tight, after only about five months of operations. Cameron, who also co-owns Hunan by the Falls and Hunan of Solon, is reportedly out of town and unavailable for comment.

Sunday diners . . . Sunday brunch didn't work out at Major's Club Isabella (2025 University Hospitals Drive, 216-229-1177), but Sunday dinner is back on the menu, beginning February 8, from 3 to 8 p.m. While the restaurant's traditional à la carte offerings continue to be an option, chef-owner James Major will also be cooking up Sunday-only si dinners for two -- a four- or five-course banquet, accompanied by Beringer wines -- for only $50 to $75 per couple. (Prices will vary, depending on the details of a particular Sunday's bill of fare.) For a final artful touch, local jazz musicians will take the stage on the last Sunday of each month . . . Westlake's M Bistro (2380 Detroit Road, 440-250-5550) is also offering fixed-price fare, every Sunday through Wednesday. For $30.95 per person, diners can design their own four-course feast, including appetizer, salad, an entrée, and dessert. App options, for instance, include such items as herb-baked polenta, escargot, or an antipasto plate; entrée possibilities range from tilapia to braised short ribs to sautéed breast of chicken. Alternatively, guests can order as usual, from the restaurant's traditional à la carte menu of steaks, seafood, wood-fired 'zas, and Mediterranean classics such as veal saltimbocca.