Police took 27 minutes to respond. By then, Calvin Hall was dead. 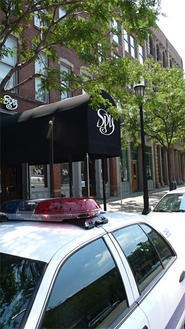 Last week's Independence Day celebration might be better described as Use It or Lose It Ammo Night here in our Venice by the Lake. The final stats: eleven people shot, six killed. But at least one slaying could have been prevented.

Kevin Montgomery, classified manager at Scene, lives in the Hat Factory building next to Spy Bar on West Sixth. His mother was visiting from Florida for the holiday, and she couldn't have been too pleased with her son's fashionable address.

All week, loud music and partying reigned on the street. But by 2:35 a.m. the morning of the 5th, the noise had become obscenely loud, and Montgomery went to the window to investigate.

Below, a caravan of six or seven pimped-out cars cruised the street, blaring hip-hop. They converged in front of Spy Bar, parking diagonally across the street and stopping traffic in both directions. Guys began emptying from the cars as the clubs closed down. Montgomery sensed they were looking for someone in particular.

"I've been here six months, watching the street scene," he says. This wasn't the normal weekend chaos. Something was about to go down.

But 10 minutes later, there were still no cops. Seven minutes after that, gunshots filled the night. People screamed and ran for cover. "It was as if a bomb had gone off," Montgomery says.

He saw the body of one man being dragged across the street. Montgomery dialed 911 again, but it would be another 10 minutes before he heard the first siren.

"It's outrageous," he says. "This could have been prevented. Someone should have responded to my call."

When it was all over, 23-year-old Calvin Hall of Twinsburg was dead.

Montgomery called police the next day to complain, but was told that "three or four incidents were happening at the same time." It was all "too much for the available police force."

To be fair, the city was doing its best impression of Mogadishu that day. Fireman Terrance Hough Jr. went unhinged in a neighborhood beef over noise, shooting five people. And with the heightened power of over-the-counter fireworks, it was hard to discern between innocent merriment and a possible invasion by North Korea. To police, punks fighting on West Sixth would seem a secondary concern.

Lieutenant Thomas Stacho also disputes Montgomery's time frame. "According to the report I have in front of me, the shooting began immediately as the group of males walked out of Spy Bar, between 2:55 and 2:58," he says. He was unaware of previous 911 calls.

Unfortunately, the area is one of the bright spots of Cleveland development, luring the young and monied back to the city. Now residents are left to worry about their safety. Pricey condos aren't supposed to come equipped with random gunfire.

This wasn't the first incident near Spy, says Councilman Joe Cimperman. "We've heard about a lot of issues at this club specifically. We've sat down twice with the owner to discuss having better security patrol," he says. "Police response is an issue, but the fact is we wouldn't have to worry about it if we had more responsible management."

On Thursday night, camouflage-clad security men stood guard in front of the bar. Squad cars were situated near West Sixth and St. Clair.

But to Montgomery, it was a case of "too little, too late. Where were they the night before?"

The boil on the butt
As TV news geeks descended on West Sixth last week, Robbie and Sean, two waiters at Sushi Rock, could have envisioned this day. This wasn't the first time their neighbors across the street brought TV cameras and the crime-scene unit to the area.

The men believe there's a growing problem with unseemly folk gathering on their street, and it starts with Spy Bar. "They're the boil on the butt of West Sixth Street," Sean says. "People get in trouble in front of that bar and not any of the others."

The bulk of the trouble comes from the club's Friday hip-hop night, bringing fights and scaring customers away from other places. "It used to be the best club on the street," says Robbie. "It feels like it's the Flats now."

The men insist they don't have a racial thing. It's a Guys With Small IQs Who Compensate With Big Guns thing.

"We have a great clientele that's African American," Sean says. "We just know they won't be coming in with guns and shooting up our restaurant."

Defending a hero
Call us old-fashioned, but Punch was never a fan of execution-style massacres. Yet it's hard not to make an exception for the late John Patrick Lee.

He was among the GIs who liberated the infamous Dachau death camp at the end of World War II. What they found inside was beyond ghastly -- thousands of bodies strewn about like garbage, children starved to mere skeletons, lamp shades made of human skin.

So Lee & Co. did what most people would have done: They went berserk.

In what would later be called the Dachau Massacre, the soldiers rounded up SS guards and got a little trigger-happy. Accounts vary, but they slaughtered at least 60 Germans. In a 2001 interview, Lee admitted to participating in the killings. "It was wrong," he told the reporter, "but you had to have been there."

We're willing to give him the benefit of the doubt.

But that interview is now coming back to haunt his family. Virginia neo-Nazi Bill White, once the media liaison for the National Socialist Movement, has outed Lee on his blog, Overthrow. He lists Lee's name, home address, and phone number in Westlake, as well as the names of family members.

"Why is it that German 'war criminals' are being hunted by the Jews, while American war criminals continue to walk free?" White writes.

Yet the man known for dressing in full Nazi uniform at skinhead rallies isn't exactly a cagey hunter. He apparently didn't realize that old age got to Lee before his band of rednecks could. The old man passed away in 2002.

So the Nazis must resort to harassing Lee's elderly widow. When Punch called her home, a Westlake cop answered the phone.