Dave Gorman explains how one plus one equals one in the world of Google. 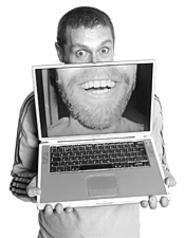 Ever wonder what words like "Dork Turnspit" and "Hydroids Souvlaki" have in common? Dave Gorman did. The British comedian trekked around the world in search of those and other Googlewhacks -- two totally disparate words that, when plugged into Google, return one lone website with a match.

Gorman spent two months in 2002 traveling more than 90,000 miles and visiting the owners of 10 Googlewhacked websites. Gorman turned the results of his journey into a one-man performance show, Dave Gorman's Googlewhack! Adventure.

Gorman's Adventure uncovered a prog-rock-lovin' Columbus man, a closeted Kylie Minogue fan overseas, and a gun-wielding Texan who took him to Mexico in search of some "Coke." Turns out the guy was an antique Coca-Cola collector, who recruited Gorman for an armed treasure hunt south of the border. "There were many times I feared for my life," says Gorman.

The inspiration for the adventure hit Gorman, 34, as a deadline loomed. He was procrastinating on writing a novel when he received an anonymous e-mail, notifying him that his website qualified as a Googlewhack. (Gorman saves most of his stories' details -- like the word combo that started his adventure -- for his two-hour show.)

"Once you find out what a Googlewhack is, you're curious to find one yourself," he says.

It's not like Gorman hasn't done this sort of thing before. His previous project, Are You Dave Gorman?, took him to seven countries in search of people who share his name. So on one drunken New Year's Eve, when a pal dared Gorman to embark on a worldwide Googlewhacking hunt, he was up for the challenge.

"I hadn't written a word of the novel, and I owed my publisher money back," he says. "It was easier to be [across the world] than it was to be at home in London, having to deal with that issue."

Like a new-millennium Charles Kuralt, Gorman used his eight-week journey to uncover observations about his fellow man. His performance doesn't patronize his subjects. On the contrary, the show is an affectionate tribute to Gorman's discovery of "an incredible wealth of human kindness."

Gorman says he's through Googlewhacking. He also never got around to writing the book that got his whole Adventure rolling ("It hasn't even been started," he sighs). But he walked away with a valuable lesson.

"I shouldn't drink tequila," he laughs, referring to the booze-soaked bet that launched his escapade. "And I shouldn't drink Jack Daniel's. I basically discovered that me and alcohol aren't really good bedfellows."