Puppets and solid performances bring a tired story to life. 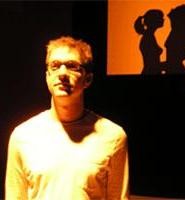 If you are lamenting the inevitable procession of familiar holiday entertainments, from Frosty the Snowman to the Grinch, you may be pleased to hear that there is a production now onstage -- putatively about Christmas -- that will challenge you on many levels and entertain you on nearly all.

In The Long Christmas Ride Home, playwright Paula Vogel gathers the emotional shards of a seriously dysfunctional suburban American family and arranges them into a sad but hypnotic mosaic that's touching in a number of unexpected ways. Using third-person Our Town-ish narration and dialogue scenes, along with life-size puppets, shadow puppets, and small snatches of dance, this remarkable work by the Bang and the Clatter Theatre manages to involve the audience in ways that at times are darkly humorous, but always thoroughly captivating.

Paula Vogel is no stranger to tales of screwed-up families, but right from the start, this excursion feels significantly different. This is because the clan that is riding along to church and then the grandparents' house on Christmas Day, sometime in the 1950s, is made up of two real people, dubbed Man and Woman, and three kids played by bunraku-style puppets. Each of the puppets, representing 12-year-old Rebecca, 9-year-old Stephen, and 7-year-old Claire, is manipulated by a fully visible black-clad performer who later plays the child as an adult.

As the parents fence with each other, through their direct conversation and their overheard inner thoughts (he's having an affair, she fantasizes about one), the kids poke and prod each other in the backseat cross-checking familiar to any family. On the surface, it's a fairly banal situation. But the ordinary becomes extraordinary through the use of the puppets, which is dictated by the playwright. Their impassively molded faces and unblinking eyes convey more emotional depth, more urgently, than would seem possible.

The parents and their puppet progeny arrive at their Unitarian-Universalist church, which is a refuge for Mom and Dad, since she's a lapsed Catholic and he's an assimilated Jew. Once in the pews, they are treated to a sermon that explores the meaning of life through Japanese woodblock prints projected on a screen. This gentle parody of the wide-ranging UU spiritual mind-set is knowingly amusing (as Mom helpfully explains to her daughter, "We're non-denominational, which means you decide what you believe in, yourself, when you are older").

The play doesn't build characters so much as it toys with stereotypes, including Stephen, who dislikes sports but loves watching the other boys at play. Plus, he alone is transfixed by the Japanese culture introduced by the minister and which weaves itself through the production techniques. This layering of storyline and storytelling gradually forges its own momentum, which culminates about halfway through the 90-minute piece in a scary confrontation at the grandparents' tiny apartment. Each of the presents given to the children that day -- a diary for Rebecca, a soccer ball for Stephen, and a gold bracelet for Claire -- figure in later scenes, as Vogel flashes forward to reveal how the kids turn out.

There is so much rich symbolism and ritualized theatricality in Ride that it teeters on being overly precious and self-congratulatory. But director Sean McConaha keeps his gifted cast rigorously focused on each moment and manages to avoid virtually all the pitfalls inherent in such an ambitious project.

As the parents, Ron Cuirle and Teresa McDonough hit precisely the right tone, fueled by the cold rage of a relationship in tatters, glumly grasping for something that will give their lives a bit of meaning. In their hands, this precarious marriage doesn't seem hackneyed or predictable.

The three puppeteers-turned-actors have their own spotlight scenes, as the grown children must deal with rejection in the form of shadow puppets, silhouettes of their ex-lovers who have locked them out of their lives. Rebecca (Heather Irwin) begs to be let into her boyfriend's flat after he found her diary and learned she was pregnant. In an almost identical scenario, law student Claire (Sara Cutlip) is crushed when she watches the object of her affection, Naomi, play kissy-face in the window with another girl.

And finally, Stephen finds himself locked on the wrong side of a door he recently refinished for his lover Joe, who has taken up with a young stud. Ryan McMullen draws every molecule of humor and sadness from Stephen's predicament, which leads to foolishly unprotected sex at a boy bar and his eventual death from AIDS.

If all this seems like 10 pounds of angst in a 5-pound sack, it is. But somehow, playwright Vogel and B&C turn it into an evening of dark laughter and haunting insights. This may not be traditional holiday fare, but for those who feel their cerebral cortex withering under the assault of "Jingle Bell Rock" on the radio, this is bracing and enthralling stuff.