Confusing almost everyone it encounters, !!! puts the pow pow pow back into dance music. 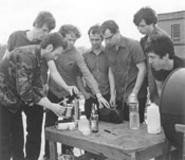 They book shows that later fall through. Their albums confuse record store owners on sight. And even their audiences don't get it. Indeed, even close friends of Sacramento's !!! don't always recognize the band's incredibly confusing -- and therefore career-hindering -- moniker on fliers. Spelled "!!!," the name of the group is supposed to be pronounced as pretty much any sound repeated three times, like "Pow Pow Pow" or "Chik Chik Chik." Or perhaps more appropriately, "What? What? What?"

"It fits us completely," guitarist Mario Andreoni says. "It's pretty much commercial suicide."

Formed in 1996 from the remnants of the phenomenal but overlooked mid-'90s hardcore act Yah Mos, !!! began as an offshoot of local dance parties. "Downtown Sacramento is just like a medium-sized town within the city," Andreoni explains. "It's not too expensive to live there, and there [are] enough people going to shows and parties to have fun. We basically all were friends, and we wanted to make some music that people could dance to."

The seeds were already there: Yah Mos, also fronted by !!! singer Nic Offer, was buoyed by a brazenly danceable, horn-laden undercurrent. But it was on the road that the vision for !!! was truly realized. "When we were in the Yah Mos, on tour, we would play these mix tapes we'd made for parties in other towns," Andreoni remembers. "Most towns we visited, it was something new, and people loved it."

Then, once they returned home to Sacramento, !!! was born. The eight-member ensemble spent its first two years gigging around town, playing house parties and the occasional big bar show. The group took off slowly while Offer, Pope, and bassist Justin Van Der Volgen devoted time to an instrumental outfit called Outhud. The two bands then released a full album together. The result, a self-titled split released jointly by Gold Standard Laboratories and Zum fanzine, juxtaposed Outhud's clever, subtle take on new wave with the primal, raw grooves and guttural vocals of !!!, making for one of the most memorable albums of 1999.

Soon after the disc's release, both groups hit the road, becoming well known for their in-your-face stage antics and innovative take on dance music.

"People think that we show up in your town and make you dance," Andreoni says, laughing. "We also have a lot of people you would consider, well, squares, coming to our shows. People read about us or hear about us who wouldn't really show up to a hardcore show. It's a big mishmash." Andreoni likes the fact that the band inspires people to move. "Nic is the one with the microphone, and once his juices are flowing, he gets into it. He's gotten better as far as shouting things, but Nic's approach to it is supposed to be harsh. We're in a new era of yelling things to the audience, like 'Dance, motherfuckers, dance!' I remember the exact same thing when I first started going to hardcore shows. I guess people haven't been moving as much lately, and we're helping to bring that back."

Touring has become an integral part of !!!'s songwriting process, helping the band incorporate the spontaneous qualities of its inimitable stage act into the finished recorded product. On the band's latest full-length -- self-titled, for maximum confusion -- the seven tracks showcase a previously unheard of range for !!!, both musically and emotionally. Along with the expected subjects of getting down and getting it on, the record is tinged with remorse and skepticism, unlikely motifs for a dance record. "It's not all about politics and partying," Andreoni admits. "We're just getting better, and that becomes darker. I'm glad that we're not just a generic punk band trying to be a generic soul band."

Still, !!!'s sound began and remains firmly rooted in punk rock. As the music has meandered toward funk and soul, the comparisons have come from all directions. "We get compared to the Contortions and the Minutemen all the time. I love the Contortions, but I've never liked punk-funk," Andreoni states flatly. He's also quick to dismiss both funk-tinged rap metal and most commercial dance music.

"Some of us were around when Anthrax and the first wave of commercial metal was doing the same thing. I was 15 and apeshit over Metallica as much as any kid." Nowadays, though, the mainstream doesn't really concern Andreoni. "We listen to so much stuff with a groove to it. We have dance parties, and we play all this music: punk, '60s soul, underground hip-hop. Almost all Top 40 music is made by the same producers. They use the same programs to make these same songs . . ." He pauses to complete the thought. "There's a definite void when that's considered dance music."

Indeed, rather than just busting moves, this bunch busts lips as well.