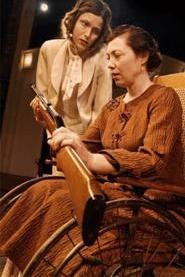 Mother. Bitch. Saint. Whore. Once you pop into the world female, your choices for gender roles -- even today -- are pretty well established. Faced with this severely proscribed set of options, women either had to go mad or invent feminism, in order to grab some control over their own destiny.

Of course, feminism has always been a troubling concept, even for feminists: "Man is not the enemy here, but a fellow victim," Betty Friedan once said. "The real enemy is women's denigration of themselves." This intramural battleground, where women try to work out their complex identities and relationships, is on display in the challenging but continually stimulating Fefu and Her Friends, now at Cleveland Public Theatre.

From the play's first line, spoken by hostess Fefu, it's clear that there will be issues: "My husband married me to have a constant reminder of how loathsome women are." Set in 1935 New England, Fefu has invited seven other women to her well-appointed home, where they are planning a fund-raiser of some kind. But playwright Maria Irene Fornes is less concerned with that event than she is with exploring the thought patterns of these upper-class women, who find themselves dancing to the tune of society's patriarchal piper.

Wheeling precariously from witty Cowardesque dialogue to an impassioned litany of psychic pain, Fornes tosses ideas like a hyperactive circus juggler. Many of the thoughts are dazzling, but the overall dramatic thrust is frustratingly elusive. The best advice is to simply allow this well-crafted production to play out and affect you as it will; it's guaranteed to provide fodder for thought and discussion, even if all you want to talk about are the inventive staging decisions made by the playwright and director Raymond Bobgan.

While it's at Fefu's crib that everyone gathers, she is not the most compelling personality. As performed by Jill Levin, Fefu is a bit too obviously eccentric to engage convincingly. More compelling is Holly Holsinger as Julia. Confined to a wheelchair, Julia is either the victim of a shooting accident, an epileptic, a borderline psychotic, or none of the above. But she is obviously tormented, and she serves as the hallucinating Cassandra of the group, conjuring fervid images in an intense monologue that encapsulates every woman's worst fears.

Fefu and Julia form the core of this octet, around which the others orbit. Among them is Emma (a thoroughly believable Anne McEvoy), a flamboyant globetrotter obsessed with the imagined appearance and configuration of strangers' genitals. "I think it's odd that everyone has them. Don't you?" she asks Fefu when they're alone outside. Then Emma goes on to explain that people gain entrance into heaven depending on how well they performed sexually. "Heaven is populated with divine lovers. And in hell live the duds."

This scene and three others play out simultaneously in four separate locations, after the opening that takes place on the main stage. Segments of the audience are led from place to place by CPT staffers, encountering different actors in each location. In the kitchen, plain Paula (Denise Astorino) discusses the mathematics of a love affair with Sue (Christine McBurney) and then confronts her former lover, the elegant Cecilia (Maggie Arndt). Meanwhile, in the study, the sturdy and rather pedestrian Christina (Elizabeth R. Wood) is discussing a bizarre dream that Cindy (Chris Seibert) had, when Fefu suddenly shows up, having walked over from her lawn scene.

This intriguing staging approach, which is called for in the script, is more than just a gimmick requiring deft timing. It forces the audience to approach the characters in a more direct way, discovering them in totally new settings, rather than having them paraded across a traditional stage set. And director Bobgan helps his players find the dramatic essence in each of these vignettes -- particularly in the cryptlike bedroom of Julia, where, all alone, she immerses herself in gender agonies, with a prayer she feels forced to recite. It includes many sexist observations such as "The mate for man is woman, and that is the cross he must bear." The speech itself is hypnotically engrossing, and it's remarkable that Holsinger manages to do it with spooky intensity four times in a row.

After that blast of theatricality, the second act is almost a letdown, as the women indulge in some banal activities and even have a water fight over doing the dishes. But the journey here is far more important than the destination, and it's one that's definitely worth taking.