What's in a Name?

In the case of ML, "mostly luscious" sounds about right. 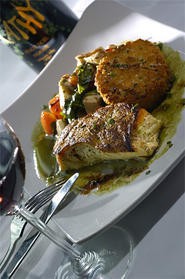 Chefs, like mechanics, tend to be tinkerers, constantly reworking recipes, menus -- even entire concepts -- in the hope of eventually getting it right. But success can be elusive. Find the precise combination of tweaks and twists, and you'll be hailed as a creative genius; preside over a series of meaningless meanderings, and your long-suffering clientele will drift away in despair.

So far, Bainbridge chef-restaurateur Michael Longo has kept to the middle ground. He's managed to explore, in one location for 13 years, three different takes on the "upscale American bistro" concept. And while he hasn't yet crafted a groundbreaker, he hasn't scared away the regulars either.

ML the Restaurant is the newest incarnation of what began in 1994 as Longo's Market Square Bistro, a casually upscale eatery featuring a melting-pot menu of "new American" cuisine. By 2002, while busy trying to herd his Cowboy Food & Drink concept into a chain of laid-back BBQ joints, Longo renamed the restaurant Firefly, did up the rooms in a Mission-style motif, and turned the kitchen over to a talented protégé. Then came the 2006 fire, which closed the space for nearly a year. When it reopened this winter as ML, the decor was more contemporary, the wine list more impressive, and Longo, now divested of his Cowboy interests, was back at the range and eager to get cooking.

Throughout the changes, Longo's general push has been toward offering a more upscale dining experience. Today's ML guests will find white tablecloths, votive candles, and a teensy amuse-bouche to greet them once they've settled in their seats. Still, the transformations have been subtle -- more an evolution than a revolution.

It's a smart plan, judging by the happy crowd on a recent Saturday night. Then again, as a Culinary Institute of America grad and a well-seasoned culinarian, Longo is no dilettante. He knows his clientele and has kept ML's ambiance relaxed and the prices less than eye-popping. (Most entrées run $25 or less; most gourmet 'zas check in at $12-$14.)

As for the cuisine: The chef favors bold flavors, borrows often from international pantries, and does a wicked riff on mac & cheese -- regardless of the name above his front door. And while he may tell you that ML is his most elegant effort to date, the wall-mounted TVs that irked us seven years ago are still tuned to sports, and the servers still aren't likely to crumb your table.

So if longtime fans aren't likely to notice much beyond the name change, what will they find? Mostly a well-thought-out menu featuring an assortment of old faves (veal meatloaf, steak, ribs, and mac & cheese), as well as interesting new possibilities such as an entrée of Muscovy duck, prepared three ways -- as roasted breast, as confit, and as a smoked topping on a four-inch mini-pizza.

At its best, Longo's fare practically shouts with rich, assertive, yet harmonious flavors. Take a lush Mediterranean tango of pan-roasted Pacific halibut; crispy, creamy lemon-Parmesan risotto cake; a swoosh of basil essence; and a toss of baby arugula, Roma tomato, and fresh mozzarella, in a fragrant vinaigrette -- as colorful and eye-appealing a dish as a diner is likely to ogle. Better still -- while the halibut probably could have come out of the pan a few moments sooner -- the interplay of intense, sultry flavors was like a shot of summer sun.

More casual but no less riveting was a nine-ounce Kobe burger, topped with smoked bacon, aged white cheddar, and baby arugula. Tucking into this bad boy was a dribble-down-your-chin delight, each bite a heady smack of smoke and beef. On the side, a small ramekin offered roasted-garlic aïoli, while the bottom half of a silvery martini shaker held a bouquet of golden fries, seasoned with salt and savory smoked paprika. Yum.

An appetizer trio of Hawaiian bigeye tuna -- raw, grilled, and seared with five-spice powder -- also revved our engine. Not only was the thinly sliced tuna pure and fresh-tasting, but the sassy accompaniments made it pop: vanilla-saffron cream, shiitake mushroom salad, and a rich wasabi aïoli so mesmerizing that, when the tuna finally gave out, we grabbed some bread to sop up every drop.

Not that every dish achieved such glory. Nothing wrong with our Certified Angus Beef strip steak -- done as ordered to medium-rare, slathered with a zesty green-peppercorn sauce, and sided with glossy mac & cheese -- but roasted white asparagus spears, also on the side, seemed vaguely undercooked and underseasoned, and a sun-dried tomato garnish was just boring.

More disappointing was the roasted Berkshire pork tenderloin. A surfeit of salt and an onslaught of fiery pickled jalapeños obliterated all nuance, while a pile of naked, tired-looking arugula added nothing to the festivities.

On the other hand, a punch-packing Dirty Bird martini -- Grey Goose, Tabasco, olive juice, ground black pepper, and jalapeño-stuffed olives ($9) -- left us feeling festive and made a spicy, refreshing sidekick to a duck confit pizza. Unfortunately, the kitchen burnt the pizza on the first pass; by the time the second offering made it to the table, our entrées were just moments behind.

Afterward, options included a selection of ports, Madeira, sweet wines, and dessert martinis. And of course, there was the signature bread pudding, spiked with dried cherries and white chocolate. But our pick was the dense, silken pot de crème, shot through with essences of cardamom and coffee. Call it super-rich custard or pudding of the gods: By whatever name, it would still be delish.