Eugene Sanders promised a new era. So why is he giving work to Nate Gray's buddies? 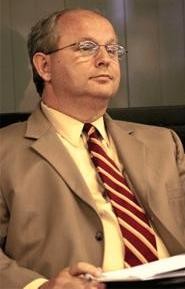 School began this year with a rare commodity for Cleveland's kids: hope.

New CEO Eugene Sanders was making headlines with a shock-and-awe campaign that started as soon as he arrived from Toledo. He whacked most of the district's top brass. He stopped paying construction contractors millions of dollars in extra fees. He even fired a consultant -- the bureaucrat's favorite crutch -- after finding the company was raking in $2 million a year.

It was a welcome rampage for a district known for its star-studded record of waste and Enron-style deception.

But last month, the schools moved to negotiate $10 million worth of contracts for the next phase of its mammoth construction project. One name leaped from the list of winning engineers and architects: Ralph Tyler Companies.

Tyler went to Ohio State with former Mayor Mike White, and the two remained pals throughout White's dozen-year reign. During that time, his firm helped design such high-profile projects as Browns Stadium, the Cleveland Public Library, and the new federal courthouse. He became one of the best-known minority contractors in the state.

But he's also a familiar name inside the Cleveland office of the FBI. In indictments filed in 2004 and 2005, federal prosecutors accused someone known as "Vendor 1" -- whom documents and public reports reveal to be Tyler --of playing a central role in Nate Gray's East Cleveland bribery mill. They allege that Tyler was a middleman who shuttled cash from contractors to Gray, who then made deliveries to Mayor Emmanuel Onunwor.

According to the feds, CH2M Hill, a Colorado engineering company, hired Tyler in January 2000 as a consultant to help it win a $3.9 million contract to manage East Cleveland's water and sewer system. Tyler agreed to pass CH2M's bribes on to Gray.

A year later, Onunwor approved the CH2M contract without taking other bids. By the next year, the company was paying Tyler $10,000 a month. The indictments allege that Tyler dutifully passed a portion on to Gray, who then delivered the mayor's cut in plain white envelopes.

Meanwhile, the feds assert, Tyler was also bribing Onunwor directly. At one point, they say, Gray gave Onunwor $8,000 in cash from Tyler. The mayor later helped get Tyler contracts in East Cleveland, but this didn't sit well with Gray.

An indictment describes a September 2002 phone call in which the two men squabbled over their influence with Onunwor. Gray even accused Tyler of stealing "my mayor."

For the most part, however, the scheme worked splendidly -- until Onunwor got caught. The FBI nabbed him in 2003 as he was leaving his office with $700 in an envelope. Onunwor later admitted to steering contracts to Tyler at Gray's request.

(CH2M Hill was never charged. Its lawyer says that the company had a consulting contract with Tyler and that Gray was Tyler's subcontractor, but that CH2M Hill was unaware of Gray's payments to Onunwor.)

Both Onunwor and Gray were convicted on corruption charges. But Tyler was never charged. His lawyer claimed that the thousands of dollars Tyler gave Gray were legitimate consulting fees and that Tyler was "completely unaware" of the bribes.

Yet these weren't the only accusations launched at Tyler. Four years ago, FBI Agent Christine Oliver wrote a secret affidavit requesting permission to tap the phones of Tyler, Gray, White, and others involved in a widespread Cleveland extortion scheme. She essentially alleged that the men were selling city and school contracts like Chicken McNuggets.

Gray was at the center of the scam, Oliver asserted, acting as a "bag man" for White. Anyone who wanted a piece of city business -- be it building an airport parking garage or installing technology in schools -- had to pay him first.

The affidavit mentions a confidential source, identified only as the owner of a "well-established minority owned construction company," who told the FBI that bribes were often disguised as consulting or professional fees. The source noted that Tyler was in on the game. "Tyler's company received a number of city contracts, and has paid Gray for them," Oliver wrote.

The contracts included work at Hopkins and the Cleveland water department. Both areas became targets of FBI investigations.

Meanwhile, it appears that Tyler hasn't lost his friends in high places. Cuyahoga County commissioners hired his company as the lead architect for the new juvenile detention center. This summer, the city control board selected him to help design a new recreation center.

Tyler's contract with the schools hasn't been finalized, but Chief Operating Officer Dan Burns expects the company will get a small portion of the $10 million project.

Burns, who followed Sanders from Toledo, says that Tyler has a history of "good work." He's aware of the bribery accusations, but maintains that Tyler is innocent until proven guilty.

"If they would've been found guilty of felonies and things like that, I could make a case," he says. But without a conviction, he considers them a "viable local company."

Even Councilman Mike Polensek, a longtime critic of the White administration, agrees. "Unless they are charged, I guess they're as qualified as anyone else."

Yet such legal niceties may be lost on residents, who now find this supposedly new era populated with the same old characters. As Representative Jim Trakas (R-Independence) points out, city and state taxpayers are footing the bill for a district whose public credibility is anemic at best.

"I don't think Mr. Tyler should be banned for life," Trakas says. But "this project needs to be watched like a hawk. One dollar over budget, and people are gonna ask whose pockets are being lined."