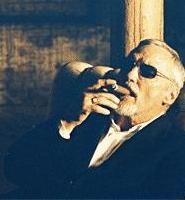 Americano (MTI)
Before he is due to take a high-powered corporate job, college graduate Chris (Joshua Jackson) heads off with two friends (Timm Sharp and Ruthanna Hopper) to Europe, where they end up in Pamplona for the running of the bulls. There, he encounters one of those saucy Latinas (Blade II's Leonor Varela) who can turn a man's world upside down. Together, they explore the countryside and visit a wacky, seemingly dangerous urban club run by Dennis Hopper (undoubtedly present as a favor to Ruthanna). In Americano's most memorable scene, he reenacts the running of the bulls by having pit bulls chase midgets. But there's no plot to speak of, and not much happens to mar the great vacation everyone's having. Among the bonus features comes the revelation that the cast actually endured the running of the bulls. -- Luke Y. Thompson

Irresistible (First Look)
Too often, "psychological thriller" means the script isn't clever enough to develop characters and plot at the same time, so a whole lotta nothing happens till the last 20 minutes. Irresistible starts that way, but it manages to pass the time well, thanks to a slumming Susan Sarandon. As a children's book illustrator who might be a target or a stalker -- or might be going crazy . . . or both -- Sarandon reminds us that she used to be famous for something other than morbid liberalism. Irresistible takes its time pitting Sarandon against her husband's young assistant, who is either stalking her or is the victim of her paranoid fantasies. It all works, though the film's 100 minutes end up feeling padded; if you're going to spring for big names, take the time to shore up your script. -- Jordan Harper

Cuban Blood (Velocity)
This thing is so boring, it's almost impressive. Taking pre-revolution Cuba -- with its potent mix of class tensions, ideologies, violence, and tropical settings -- and making a snoozer out of it requires an act of will, like playing a lullaby on a snare drum. Harvey Keitel, whose eye for indie talent has faded since Reservoir Dogs, plays a town patriarch as though he were asleep. A 10-year-old walks around seeing life unfold, while his adult voice spews constant narration, all of it fantastically obvious. It's a textbook example of why voice-overs usually signal a weak script and an unsure director. Meanwhile, mostly offscreen, a bloody revolution boils. The movie wants to be epic and sprawling, a portrait of a way of life gone by. But by the time the revolution ends, you're liable to be thanking Castro. -- Harper

Dead Bodies (Magnolia)
Americans give everything Irish an extra 10 points on principle; we see their drunken louts as "rogues" and their boiled beef as "cuisine." Maybe that's why it's so easy to forgive Robert Quinn's low-budget comic thriller set in Dublin. If the film's rogue had been played by an American instead of the charmingly accented Andrew Scott, we might not be so willing to forgive him for -- oops! -- accidentally murdering his shrew of a girlfriend. And, luck of the Irish be damned, he just happens to bury the body on top of the corpse of someone else's victim. Wacky hijinks ensue, and the film never really stops being less than watchable. But Dead Bodies doesn't confirm the Irish press' contention that director Quinn is a wunderkind. Americans aren't the only ones who give extra points to the sons of Erin. -- Harper