Where the Wild Things Aren't

Jackalope's a tame alternative in West Side dining. 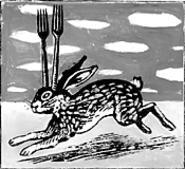 The fierce, man-eating jackalope, indigenous to our western states, gets the blame for everything from the unexplained disappearance of Texas tourists to the development of Kansas's killer tornadoes. Most of the time, the story goes, the furry feller moves too fast to be seen with the naked eye, but he can be successfully lured into the open with a saucer of cheap whiskey. Travelers who feel a certain tugging on their leg upon hearing these stories are directed no farther than the nearest souvenir shop, where they can gaze upon stuffed and mounted jackrabbit heads, sporting diminutive racks of antlers, as proof of the creature's existence.

In reality, of course, the jackalope is nothing more than a practical joke developed by cowpokes and trail hands as a way to have fun at the expense of their gullible eastern cousins. But chimera though he may be, he's been the topic of conversation around the old bunkhouse ever since me 'n' my posse saddled up and took our own little trip out west (to Lorain, to be exact) for a meal at Jackalope Bar & Rotisserie.

Like its namesake, owner Jim Andrews's restaurant near the Spitzer Marina is a jumble of parts. It's close to the lakeshore, all right, but large surrounding parking lots and the second-floor location make it hard to remember you're near the water. Menu offerings gallop headlong from the chichi (think herb-encrusted rack of lamb) to common bar fare (jalapeño-topped nachos), with nary a blink of the eye. Even the name -- a strange enough choice for a Midwest property filled with nautical references -- hints at the restaurant's split identity.

All these discrepancies could come together in an atmosphere of funky charm, of course. But, at least on a recent busy Saturday night, the fun factor was tempered by some flat-out flubs. Take the business with the wine, for instance: While we liked the compact selection of mostly inexpensive reds and whites, our wine glasses arrived at the table smeared with fingerprints and someone else's lipstick. Then there was the ambiance: Red tablecloths and white cloth napkins seemed prettily upscale, until we noticed that the floor was crumb- and debris-littered, and we spotted a staffer wheeling a garbage can through the middle of the dining room. And finally, there was the food itself: While portion sizes were generous and prices were moderate, flavors were often subdued, and the kitchen, under the direction of Executive Chef and CIA graduate John Teleha, had taken a few shortcuts.

A beautiful-to-behold one-pound pork chop was a case in point. Thick, aromatic, and nicely presented on a colorfully rimmed platter, the chop looked great. But it took only one bite to note that it was overcooked and underseasoned, and a scattering of chopped sautéed tomato and mushroom, along with a salty brown bath of Irish whiskey sauce, wasn't up to the chore of reviving it. Likewise, three deep-fried filets of perch in a tantalizingly crunchy panko-crumb crust looked golden brown and delicious. But they turned out to be dull, their only flavor coming from the tartar sauce that accompanied them. Luckily for us weary trail riders, a half-slab of ribs, though not likely to win a berth at a rib burnoff with its reliance on bottled barbecue sauce, scored a little higher on the flav-o-meter. And a Friday and Saturday night 10-ounce cut of prime rib was acceptably tender and tasty.

Dinner entrées come with warm, crusty bread and whipped butter, a choice of potato (pale frozen fries, average baked, or very good garlic mashed redskins), and a modestly sized house salad: a toss of romaine and radicchio, a slab of cucumber, and a bit of shredded carrot and yellow cheese, with a choice of mostly commercial dressings. The housemade balsamic vinaigrette was good; a bottled tomato-basil dressing was flat and uninspiring. An alternative faux Caesar salad was an additional $2, a little piece of info that our server failed to mention when she offered us a choice of salads. The surcharge seemed excessive for what turned out to be pretty much the same romaine/radicchio/carrot blend -- minus the cuke and cheese, plus a few croutons -- in a tart, anchovy-free, ersatz Caesar dressing.

Among the starters, a warm cream cheese, artichoke, and roasted red-pepper dip, served in a hollowed-out round of crusty bread, sorely needed some zip and was sparked up not a whit by bland packaged tortilla chips and two thick carrot sticks. Much better -- in fact, probably the best dish of the evening -- were the two dozen Prince Edward Island mussels: plump, sweet, and served in a sauce of melted butter with chopped fresh garlic. (The menu described it as a Chardonnay, butter, and garlic sauce; we never got a hint of white wine, but we loved the fearless twang of the plentiful garlic.)

Just like the restaurant itself, the Jackalope clientele seems of two minds. Boaters in shorts and T-shirts wander up from the nearby marina and lend a sort of laid-back, Put-in-Bay feel to the bar and the deck as they nosh on burgers, beer, and Buffalo wings. Meanwhile, the airy indoor dining room, with its high cathedral ceiling, brightly painted walls, and windows overlooking the deck, shelters more than a few well-dressed, wine-sipping parties eager to check out some of the tonier dishes. Certainly, trying to operate two types of restaurants within one space is demanding. So we have to wonder whether Jackalope's customers ultimately wouldn't be better served if Andrews and Teleha would focus on one end of the spectrum or the other and throw their talents and devotion into a more single-minded endeavor. There should be no shame, after all, in serving the very best freshly ground burgers and hand-cut french fries in town, for instance, and forgoing the more uppity filet mignons and racks of lamb, if that's what it takes to ensure across-the-board excellence.

As for the casual service, it was impersonal but efficient enough, with courses coming out of the kitchen at a steady pace and water glasses getting topped off on a regular schedule. Although our server seemed a tad testy when we requested clean, non-lipstick-and-fingerprint-marred wine glasses ("Well, I don't know what else I can find for you; I don't think we have any other clean ones"), she made no egregious errors when she finally got around to uncorking and serving our 1998 Jacob's Creek Shiraz ($23), a subtly spiced Australian red. Still, certain niceties were in short supply: Our dinner plates were left on the table until dessert was served, for instance, and we were never able to snag another round of java for our after-dinner coffee cups.

Dessert here means choosing from among a handful of routine tortes and cheesecakes shipped in from Mary's Specialty Sweet Shop in nearby Kipton. A wedge of moderately dense cheesecake, prettied up with a layer of strawberry preserves, a few fresh strawberry slices, some chocolate drizzles, and whipped cream, was nice and fresh; we especially liked its crunchy graham cracker crust and the fact that, at a reasonable $3.75, it was large enough to share.

But the real sweet ending at Jackalope is stepping onto the pier for an evening stroll, past scores of fishermen, hundreds of boats, and what seems like thousands of flocking seagulls, to watch the midsummer sun extinguish itself in the vastness of Lake Erie. On the night of our visit, the spectacle -- layers of lavender, gold, and red-rock russet shimmering on what seemed to be an infinite horizon -- nearly equaled the color and drama of the sun going down over the Painted Desert. And those dulcet breezes? I reckon a passing herd of jackalope just might have stirred them up.