Where the Wild Things Were

While Cleveland searches for hip, Coventry gets yuppified. 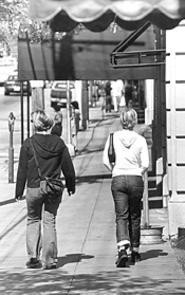 To hear The Plain Dealer and civic leaders tell it, Cleveland needs an infusion of hip to jump-start our economy. Forget more stadiums; we need cool urban neighborhoods, where bohemians can live and play. Picture South Street in Philly, or even High Street in Columbus -- places where you can eat a veggie burger, get your tongue pierced, and see a punk show, all without revving up your Volkswagen.

Coventry Road would seem to be the perfect model. The two-block stretch includes two vegetarian restaurants, a music store, a used book store, a theater that screens independent films, and a music club. "I was attracted to the neighborhood for the same reason a lot of people are: It's a classic urban, walking neighborhood, with lots of different kinds of people," says Suzanne DeGaetano, who co-owns Mac's Backs bookstore.

Even Dick Feagler, the crusty antithesis of hip, recognized the street's charm in a recent column, suggesting that a sagging Euclid Avenue be remade in Coventry's image.

Yet while pundits promote Coventry as an economic engine, the neighborhood is suffering a quiet crisis of its own. Empty storefronts and "For Rent" signs pock the street. With few exceptions, the businesses that appear to be flourishing are wings-and-beer chains -- the kind that normally anchor strip malls. One store owner says that Coventry is beginning to look like "the Flats in the Heights."

The transformation, which has been more than a decade in the making, came into sharper focus a year ago with the shuttering of Arabica. Next to go was the Food Co-op. Other recent closings include The Wilderness Shop and a poster store.

Then the Grog Shop, a grungy club that booked bands before they made MTV's buzz bin, announced that it was losing its lease. Although it now appears that the Grog might remain on Coventry at a new location, the threat of its closing raised protests from culture mavens, who lament that the street's independent spirit has been slowly draining away since its glory days, when it was a hangout for hippies and Hell's Angels.

"It's Coventry, but if all the businesses leave, if all the people leave, it's Elm Street, it's Smith Road," says Bobby Sharp, a 26-year-old clerk at Big Fun toy store.

To a certain extent, Coventry is a victim of its success. Small store owners blame rising rents for their struggles. Retail space has increased from as low as $5 per square foot in 1990 to as high as $25 in 2000. Several businesses saw rents rise by about 30 percent in the past year.

Charles Smith, who runs The Corkscrew wine store, is closing because of soaring costs. "The rent knocked me out of the whole ball game," he says.

One reason for the spike is that real estate companies are buying out mom-and-pop landlords. Kathy Simkoff, owner of the Grog Shop, was negotiating a lease with her landlord when he unexpectedly died of a heart attack last year. Montlack Realty bought the building and then declined to renew her lease, preferring to create "high-end" apartments on the second floor.

"I know there's a good market for the apartments, because we've got about 10 buildings within a mile, and they rent out real well," says Kirt Montlack.

Landlords have also poured money into renovating Coventry's crumbling buildings. "They have to get that money back somehow," says Kim Steigerwald, Cleveland Heights' assistant planning director.

Yet the street's stalwarts portray themselves as pioneers who settled the wild frontier, only to be squeezed out after they built the commercial traffic and the deep-pocketed chains moved in. "I think some of these landowners think they have a gold mine -- and they're going to end up with empty blocks, because business is not going up," grumbles one employee.

Then again, it's surprising that large companies weren't prospecting on Coventry earlier. The street has long offered a can't-miss combination: the fat wallets of Cleveland Heights and Shaker Heights, plus abundant foot traffic. And at least some business failures are due as much to the laws of capitalism as they are to rising costs.

"There's been some retailers on the street that have been there a long time, and they need to really retool themselves and figure out how they're going to change with the times," says Steigerwald.

Still, if landlords aren't careful, they may strangle their golden goose. People come here precisely because of the street's idiosyncrasies. Coventry will lose its appeal if it becomes overrun with standard mall fare. After all, you can already find that in Beachwood.

"It's starting to become homogenized here," says Robert Pryor, a manager at Record Revolution. "They all serve the same thing and bring the same type of person."

Customers have already begun to notice the loss of the street's original character, says Pete Gulyas, co-owner of the Renaissance Parlour, a vintage clothing store. "We have a lot of people walk in our door and say, 'This is what Coventry used to be about. Thank God you're here.'"

Some small stores won't be there much longer, if business doesn't pick up. Attenson's Antiques & Books, a Coventry mainstay since 1988, saw its rent rise almost 30 percent last year, at the same time that a slow economy was eating into sales.

"There's a fear that we might not be able to stay, somewhere down the road," says Mitchell Attenson. "But we're hanging in for as long as we can. We don't want to be anywhere else."

Neither do the people who visit Coventry. At least for now.