Where to Score the Best Pupusas in Cleveland 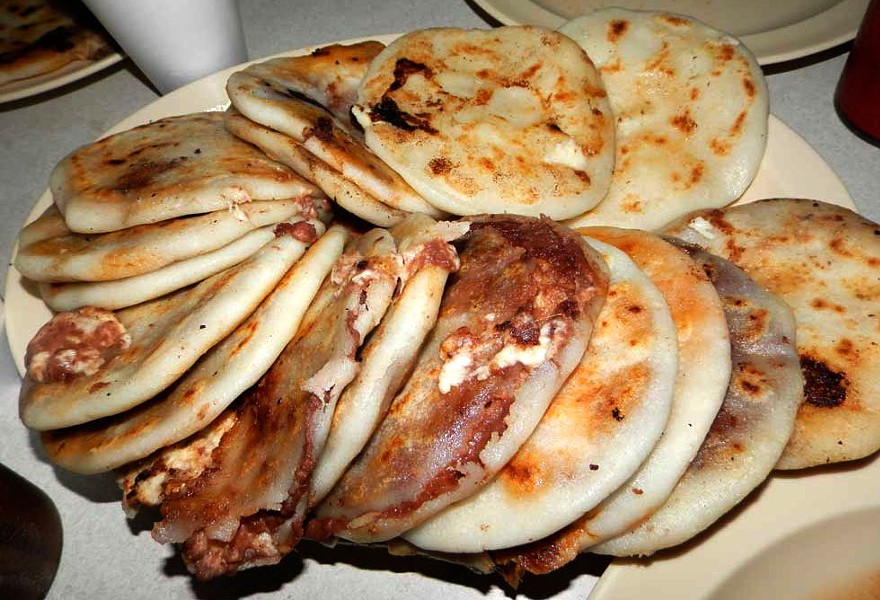 With new joints opening on very side of town, we very well may have reached Peak Taco in Cleveland. And while we love the tortilla-bound concoctions as much as ever, variety is the spice of life. That's where the pupusa comes in.

The pupusa (say it poo-POO-sa — yes, it's fun) is a traditional dish hailing from El Salvador. It's a stuffed, savory corn flour cake that resembles a pancake cross-bred with an English muffin. Like the pancake, it demands to be eaten with a fork and knife (attempts to eat it by hand will not end well). And like the taco, it's filling, fun to eat and cheap: Most in town range from $1.80 to $2.50.

At the three near-westside establishments that serve them, pupusas are made to order and served hot off the grill. They're paired with curtido; a lightly spiced cabbage and carrot slaw; and salsa roja, a thin, mild tomato sauce.

All pupusas come stuffed with queso blanco, a mild cheese with a pleasurably melty, stretchy texture. The generous cheesiness of most pupusas makes pulling away a forkful akin to cutting into a stromboli. The revueltas, which translates as "scrambled," is a savory mixture of finely ground pork and black beans. Another great pick is the queso con loroco, made with an edible flower native to Central America.

It's easy to miss Pupuseria La Bendicion, hidden as it is behind a Gyro George in the Lorain Market district. But the name promises blessings, and La Bendicion delivers. They serve generously sized, overlapping corn cakes —just two had us reaching for our Thanksgiving Day pants. The space is small, and the offerings are minimalist. There's no bar, but Coke from a glass bottle works great to wash down the savory cakes.

El Arepazo y Pupuseria in Fairview Park has a full bar and more of a sit-down atmosphere. Run by a Colombian-Salvadoran family, it highlights beloved dishes from both countries: arepas, kissing cousins to pupusas, are heavily featured and highly recommended. Chase that meal with an ice- cold Sol, an underrated Corona alternative.

Pupuseria Katarina in Parma is the most festive in terms of decor. Diners are greeted with colorful posters, flags and Salvadoran music. At $2.50,the pupusas are a tad pricier, but there's a rice pupusa option as well, although it's not very popular. The Pupusa Loco ($9) nets a diner an overstuffed corn cake filled with nine ingredients. Diners are well advised to tack on an order of the sweet and creamy fried plantains. The housemade horchata also makes for a sweet meal accompaniment.

Miramar, formerly La Casa Tazumal, is just down the street from La Bendicion. It is temporarily closed for renovations, but we'll be keeping a close eye on the spot.

For all its traditional-food cred, the pupusa remains decidedly un-trendy. You won't find them on the menus of more popular South American spots like Barroco or Moncho's, you can't score them from any local food trucks (trust us, we looked), and thus far we've uncovered no fusion-y takes (banh mi pupusas, anyone?) cropping up on local menus.

Perhaps one reason the pupusa hasn't yet caught on is because of that simplicity. It's too humble, for now, for even the fad-chasers who worship the inexpensive ethnic dish. But then, foods not traditionally thought of as sexy have a way of catching on, especially in a city with roots as blue collar as ours. We gave the world the Polish Boy, after all.

Pupusas may remain a hidden gem in Cleveland. Or, in 10 years, we might all be going out for Pupusa Tuesdays. Either way, we hope Clevelanders will continue to patronize the places that brought the pupusa our way.