On the road to Yellow Springs, in search of Dave Chappelle. 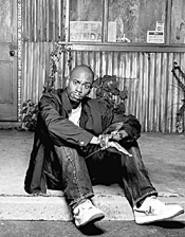 Somewhere in the void of southwestern Ohio, beyond roadside veggie stands and backyard orchards, is a head shop called Import House. Black-light posters hang in display cases next to a shelf of fluorescent bongs. A meaty woman in a sleeveless shirt stands behind the counter, following customers with eyes that testify to the miles she's traveled.

"Yes, I know Dave Chappelle," she says. "When he's home, he comes in almost every day."

Everyone here seems to know the reigning king of comedy. This is Yellow Springs, Chappelle's hometown.

Of course, it's hard to avoid Chappelle these days. Collections of the first two seasons of his Comedy Central show continue to bitch-slap sales records. He signed a $50 million contract to produce seasons three and four. And he also suddenly went AWOL from the set, washing up on a South African beach a week later, enjoying a vacation incognito. After a few days, he returned to the only other place where he could feel free: Yellow Springs, Ohio.

The town begins just past a mini-golf-course/ice-cream stand called Udders and Putters, south of Springfield. Here, in the home of granola-crunchy Antioch College, Birkenstock collides with Old Navy. Men in hemp clothing and dreadlocks pass women in heels and faux-designer sun dresses. On a bulletin board, fliers for an independent movie called Blood and Breakfast are tacked next to ads for a kiddie day camp centered around nature worship. Retail chains have been banned by town council. It's easier to buy weed than a Frappuccino.

Yes, this is the home of the man who wrote Half Baked.

Chappelle spent plenty of time here as a kid, visiting his father, who taught music at Antioch. After Chappelle's Show debuted in 2003, he finally had enough money to buy a mansion here -- and live in the quiet anonymity he remembered.

"People need a place they can feel safe," says Cathy Christian, owner of Ye Olde Trail Tavern. "Would you like it if you couldn't even walk down the street without someone bothering you?"

Like a concierge at some posh resort -- instead of the proprietor of a shot-and-a-beer saloon -- Christian protects her famous customer. She knows that if she doesn't, he'll find another watering hole. The proprietors at Dino's coffeehouse across the street sense this too. Whenever Chappelle is home (at least three or four days a week), he can be found here around 10 a.m., sipping joe and reading The New York Times.

The manager won't talk about his friend, but the writing is on the walls. A framed copy of Chappelle's interview with Rolling Stone -- conducted at a table 10 feet away -- hangs above the cash register. A picture of the comedian with his wife and stroller-bound child is taped to a column along with photos of a hundred other customers.

Chappelle has a standing offer from Tom Gray to use his grocery store as a hideout. He once watched Chappelle get mobbed by a group of teens across the street. He was impressed by the way Chappelle kept moving through the gaggle, not letting them pin him into a corner.

"I told him if he ever needed to escape from all that, he could always come in here, and I could walk him out the back door," Gray says.

It's been bad enough lately that Chappelle uses the weather to cloak his trips into town.

"The joke is, you're more likely to see him on a rainy day," says Greg Savage, owner of Dingleberries record store. "That way, he doesn't get mobbed."

Savage keeps a collection of Chappelle T-shirts hanging on a rack next to paisley blouses, but he knows that having a $50 million neighbor comes with unique liabilities.

One morning an employee arrived, shaken and pale. He was driving to work, when Chappelle darted out into the street ahead of him on a skateboard. If the car had been going any faster, season three would have been canceled. "I almost killed Dave Chappelle," the young man stammered.

As the popularity of the TV show grows, Chappelle encounters take on the believability of Bigfoot sightings. For a man who comes here to cling to anonymity, too many people have met him. A high school boy doing fakies at the skate park claims Chappelle came by last week and got schooled. "I taught him some moves," he says. A computer programmer hanging out in front of an antiwar bookstore claims his friend knows a guy who saw Chappelle film a skit in town.

Still, obtaining directions to his secluded mansion is like unearthing espionage secrets. A teenager in a black fedora is miffed that anyone would even ask. Chappelle left the limelight for a reason, he says. "He wanted to get away from all that."

Luckily, not everyone's a fan. Retired mill owner Bob Heller wrinkles his nose; he once caught Chappelle's Show while flipping channels. "Not my cup of tea," he says, and he begins to draw a map.

Two miles away, Chappelle's driveway stretches 200 yards down a field, disappearing into a grove of pines. The big-money crib is hidden from the road. "No Trespassing" signs are tacked to the entrance. In no uncertain terms, Chappelle makes it clear that he does not want company.

A reporter considers driving up to the front door anyway, but only for a second. If a pot-loving comic can't find solace in Yellow Springs, where can he?

A card is left in the mailbox. Empty hands are then displayed, so tree-mounted cameras can see that the reporter has not taken the catalogue that sat rolled up inside.

Comedy Central is said to be in talks with him again. A premiere date for season three has not been set, but it appears that Chappelle is back to work.

Hopefully, the media-savvy hippies of Yellow Springs will make sure no one bogarts the weed while he's gone.