The sorry state of the Cavaliers blots the Gund family's generosity to the city. 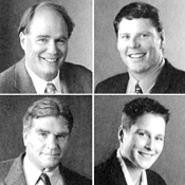 In September, the George Gund Foundation approved a round of grants totaling $5.5 million. The venerable trust shared the wealth with 108 recipients in all, ranging from the Foundation Fighting Blindness ($2 million) to Shoes for Kids ($7,500). Since 1952, Gund has given away $384 million, and it is one of the few institutions that have not abandoned Greater Cleveland. The September grants divided $530,000 among 20 arts organizations. Nineteen of them are in town.

The foundation is as progressive as it is locally minded. The environment, public education, and reproductive health are preferred causes, as is improving the lives of the disadvantaged. They recently gave $275,000 to programs that help prisoners return to society. (Try throwing a black-tie gala for that effort.) Cleveland Mayor Jane Campbell's first job out of college was with a women's group the Gunds supported. "They feel very strongly about social justice and equal opportunity and environmental matters, and that passion is reflected in the work of the foundation," she says.

Yet for all that their organization has done, the Gunds are widely seen as cheap, klutzy, and distant. In large pockets of Cleveland, the Gund name is associated not with a $10 million gift to the Great Lakes Science Center, but with the absentee ownership of a foundering NBA franchise. As the foundation celebrated its 50th anniversary in October, sports fans wondered whether the 2002-'03 Cavaliers would lose enough games to amass the lottery balls necessary to draft LeBron James. "You just get the feeling the Cavs kind of go their own merry way and are content to lose 50 out of 82 games every year," says Plain Dealer Editorial Page Director Brent Larkin.

The foundation Gunds and Cavalier Gunds are indeed one and the same. The foundation was created by George Gund II, who at the time of his death in 1966 was president of the Cleveland Trust Company (now KeyBank). Six Gunds, either by birth or marriage, sit on the foundation's eight-member board, including George III, who bought the Cavs in 1983 with his brother Gordon. Family participation is evident in the foundation's support of retinal disease research (to date, $25 million). Gordon Gund lost his sight 32 years ago.

Medical research is a grant staple, but the foundation has also taken risks, supporting what Cleveland Public Theatre artistic director James Levin calls the "underside of the community." When CPT staged Shakespeare at the zoo 20 years ago, the foundation wrote the theater its first institutional check. Levin says the Gund Foundation and the Cleveland Foundation are the city's de facto arts councils. (Cleveland, unlike most major cities, spends almost no public money on the arts.) "We're incredibly lucky," Levin says. "The whole community is."

The foundation also has a reputation for user-friendliness. Alice Roth, the development director at Bellefaire Jewish Children's Bureau in Shaker Heights, says the Gund Foundation staff is responsive to the point that it suggests revisions to grant applications. "They're not just a funder," Roth says. "They're really a central community force, staffed by very knowledgeable, talented people who are able to do so much."

Executive Director David Bergholz says the foundation strives to be helpful without being intrusive. "When push comes to shove, instead of getting some grant-seeker to hide their budgetary needs inside some project they think is exciting to us, I'd rather just have them say, 'I need $25,000 to keep the lights on.' If that's what you need, that's what you ought to have."

Bergholz says the Gund family is well thought of in the philanthropic community, but he realizes that regular folks might have missed the foundation's recent grant of $322,000 to primary and secondary education programs in Northeast Ohio. "Clearly, if you go to the issue of the status of the Cavaliers and all issues of building the sports venues downtown, you get a much more mixed feeling," he says.

Ironically, the purchase of the Cavs itself was something like an act of charity. NBA officials asked the brothers Gund, owners of the Coliseum at the time, to rescue the club from the incompetent Ted Stepien, who, one year, left the late rounds of the draft to a PR guy and beat writers. With the league's help (fresh draft picks came with the sale), the Gunds turned things around, and winning teams of the late '80s and early '90s made the Cavs a hot ticket.

A decade has passed, however, since the Cavs won a playoff series. The city's enthusiasm for the team has dwindled. An announced crowd of 6,712 watched the club fall to Milwaukee last month. In addition to putting a weak product on the floor, the Gunds have appeared to exploit the terms of the lease that brought the team downtown. The Cavs have never paid rent to the taxpayer-funded Gateway Economic Development Corporation, the arena's landlord. In fact, Gateway owes the Cavs $7.5 million. Gateway is responsible for "capital repairs" made to the arena, so every time the Zamboni breaks down or a suite needs to be retiled, the Cavs forward the bill.

As the basketball team shoots bricks with the public, the foundation does its work with little recognition outside the nonprofit world. To some extent, this is to be expected. Grant-making is generally not news-making, and the Gund Foundation's habit of making gifts in small amounts ($7,500 for a summer camp, $5,000 for wind power, etc.) is an especially poor way to generate publicity. Still, boring funding mechanisms aside, more acclaim seems deserved. The Plain Dealer heralded the foundation's 50th anniversary with a story on page six of the Metro section. Brent Larkin's editorial page ignored the occasion altogether. "I don't remember even giving them a 'cheer,' which we probably should have," he says.

Part of the disconnect is a matter of proximity. The foundation is based on Prospect Avenue, but no member of the family lives in Ohio. Gordon Gund visits from New Jersey once a month, and that's during basketball season. The Gunds keep a quiet distance. Larkin says that in his 12 years on the editorial page, a Gund has never called to complain or implore, unlike every other sports team owner he can remember. (In keeping with family tradition, foundation President Geoffrey Gund declined to speak with Scene through Bergholz; an interview with Gordon or George III, requested at the beginning of the season, had yet to be arranged by the Cavs.)

But the Gunds' hearts -- if not their hearths -- stay true to Cleveland. Bergholz is stepping down this month, and area nonprofits were pleased to see a local candidate, David Abbott of University Circle Inc., named as his replacement. "My sense of their commitment to Cleveland is that it's continuing and firm," Bergholz says.

Sports fans, in the meantime, pray that the Cavs luck into LeBron. Or find new owners.

"A basketball team is not everything to a community," Mayor Campbell says, voicing reason. "The community development work they've done, the work in education that they've done, has probably made a bigger difference over the long haul, because they've made a sustained commitment to that."