Whitey on the Mic 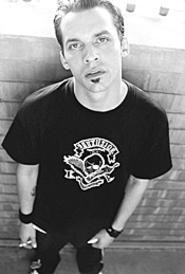 White rappers are the new black quarterbacks. Even after the Beastie Boys' Licensed to Ill became the first rap album to top the charts, after Vanilla Ice sold as many albums as a mere mortal can, pundits still argued whether a white boy (or girl) could have the skills and smarts to seriously compete in a game invented by black players.

Though Eminem's string of multiplatinum discs proves that a Caucasian can rhyme as effectively as anybody, the white MC who emulates mainstream hip-hop instantly becomes one of the millennium's new comedic stock characters, like Jamie Kennedy's wannabe B-Rad in Malibu's Most Wanted. Most successful white rap takes a punk approach, eschewing bling and braggadocio to cut to the core of the music.

Few white MCs currently do a better job mining hip-hop's depths than Atmosphere's Slug. An emerging contender from a new tradition, the Minneapolis native has something to say, and he says it with style. In honor of his upcoming stop at the Grog, we're celebrating the all-time-greatest white-boy rhymes.

Artist: Beastie Boys
Key rhyme: "I've got more rhymes than J.D.'s got Salinger/I hold the title and you are the challenger." ("Shadrach," Paul's Boutique, 1989)
Background: Even at the peak of their powers, nobody would have confused the Beasties with a verbal acrobat like Kool Keith, but "Shadrach" showed that ingenuity can be as important as mic skills.

Artist: 3rd Bass
Key rhyme: "Played-out hardcore floors, step to the stage/Your biggest fan nine years of age/Broke out 'cause the swindler took your ducat/No talent on the tool/You might as well suck it." ("Sons of 3rd Bass," The Cactus Album, 1989)
Background: When the Beasties bolted Def Jam, the label hired Brooklyn tag team 3rd Bass to piss on their memory -- which they did while borrowing a horn section from Lovin' Spoonful's "Spinnin' Wheel." The duo came close to proving that white guys could hang in urban hip-hop. And then Vanilla Ice came along . . .

Artist: Buck 65
Key rhyme: "Most people are curious/ Some want to get dirt on/A centaur, I'm famous/I walk around with no shirt on." ("Centaur" 12", 1999)
Background: Serious artists tap mythology to give their work weight, whereas rappers tend to just brag about their cocks. Canadian rhymer-producer Buck 65 does both on "Centaur," ominously backed by a cello.

Artist: Eminem
Key rhyme: "Extortin', snortin', supportin' abortion/Pathological liar, blowin' shit out of proportion." ("Just Don't Give a Fuck," The Slim Shady LP, 1999)
Background: Eminem's jabs at Michael Jackson are much funnier, but our lawyers advised us to avoid them. This line from the Detroit phenomenon's landmark debut shows how the notebook-toting rhymer straddles the line between writing and freestyling, connecting random images to compose a vivid picture.

Artist: Sole
Key rhyme: "Some people are cool/And some are less intellectual/I like having a girlfriend/And like it more when they're bisexual." ("Sole Has Issues," Bottle of Humans, 2000)
Background: Sole is the heavyweight champion of San Francisco's arty Anticon crew, and Bottle of Humans is the sound of him working the heavy bag for an hour. It's the closest indie rap has come to an LL Cool J album.

Artist: Atmosphere
Key rhyme: "Now I'm too fucked up to dance/So I'm a' sit with my hand down the front of my pants/You can't reach your goals if you don't take that chance/So pry open the trunk and get those amps." ("Balance," Seven's Travels, 2003)
Background: If Tupac lived the thug life, Atmosphere's self-deprecating Slug lives the hug life, impressing art girls with his sensitivity and good looks. More important, his rhymes tell a story and have a message. You know, what hip-hop was once all about.