Why waste money (or steal) Michael Jackson’s bogus Thriller remixes, when you can get better ones legally for free? 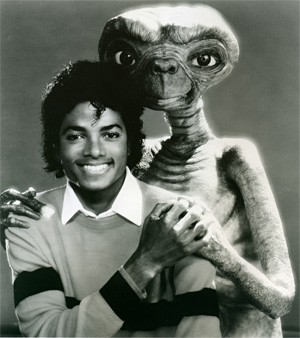 Two months ago, the silver-anniversary reissue of Michael Jackson's Thriller — a souped-up, repackaged remembrance of the nine tracks of pop/soul perfection that the tree-climbing, surgical-mask-wearing, yeah-it's-OK-to-sleep-with-kids nutty sumbitch unleashed on the world so many years ago — hit stores.

Sadly, there's one thing keeping the re-release from being just as perfect now as it was then: that goddamned will.i.am!

The Black Eyed Peas captain remixes three of the album's classic tunes (with Jackson wholly signing off), and by doing so, reminds everyone why Diddy is no longer the leader of the meddlesome, obsequious producer/performer pack.

His reworking of "P.Y.T. (Pretty Young Thing)" comes off best — if only because will has Jackson sing new lyrics that the Moonwalker pulls off with melodious ease. Even after all these crazy years, the boy can still come with the sweet vocals.

But then he and Jackson completely excise Paul McCartney from "The Girl Is Mine," making one wonder if this is Jackson's spiteful payback for all those years Macca made Jacko look like the bad guy for buying the rights to the Beatles' song catalog. At any rate, what shows up here is Jackson singing all the lyrics, while will awkwardly wedges in some manly boasts.

But by far the most egregious offense is the redo of "Beat It," which sets Jackson in a duet with a snarling Fergie. If it weren't for that train wreck of a rendition Charlotte Church did with a sloshed Amy Winehouse on British TV a couple of years ago, we'd all hang our heads in shame over this version.

For what it's worth, will.i.am isn't the only one who doesn't do the Gloved One any favors with his tricked-out tunes. Jackson is little more than a backup singer on Akon's remake of "Wanna Be Startin' Somethin'."

At least Kanye West had the decency to just add more strings and drums to his "Billie Jean" remix and let Jackson sing his own damn song. You would've thought that the ever-egotistical West, who already successfully sampled "P.Y.T." for his "Good Life" single last year, had more tricks up his sleeve.

OK — so granted, these songs may not all be godawful, but they definitely seem insubstantial next to the originals. They also make the hip-pop remixers behind them seem less like behind-the-board wizards and more like awestruck underlings who didn't want to disrespect the maestro. (Akon excepted.)

But we're here to tell you: There's a better world of Michael remixes out there.

It seems that underground rappers have a better sense of what to do with Michael Jackson tracks. A year ago, Mobb Deep's Havoc poignantly riffed on loyalty with his song "Be There," which sampled Jackson's "Got to Be There" with impressive results.

The ARE also mined early Jackson material with style. On the Dem Damb Jacksons collection, available for free download on Frank W. Miller Jr.'s Rappers I Know website (www.rappersiknow.com), the former K-Otix beatman crunches up a number of Jackson 5 favorites, while MCs Kay and Stones Throw's Oh No (who is, coincidentally, also named Michael Jackson) take turns throwing down some crafty, hard-edged rhymes.

Still, Chicago MC Rhymefest reigns as the king of reimagining the King of Pop. His witty-gritty Man in the Mirror mixtape — also available as a free download under "Mixtapes" at rhymefeststore.com — finds him teaming up with such producers as the omnipresent Mark Ronson (Winehouse, Lily Allen) and Best Kept Secret. This trio raids samples from every point in Jackson's career — Jackson 5, solo, and a few rarities in between. Remember "You Can't Win," Michael's showstopper from The Wiz?

Rhymefest gives props to Jackson's legacy — without tarnishing or disrespecting what's left of it, mind you — while also reminding us why we all should still have a place in our hearts for the fedora-wearing freak.

Unlike the bogus bonus remixes on the new 25th-anniversary edition of Thriller, these compilations show Jackson's monumental inspiration and impact. Think about it: hard-ass rappers showing love for an international pop star. Now that's the sort of perfection even will.i.am can't fuck up.