Why We Need DVDs 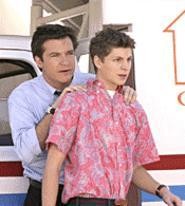 Arrested Development: Season Two (Fox Home Entertainment)
The best show on TV -- which you'd know, if you actually watched the thing -- also serves as one of the best reasons for the existence of DVD: No show has ever rewarded multiple viewings the way Arrested Development does. The second season, about the dysfunctional Bluth clan, led by an on-the-lam dad and an on-the-sauce mom, served not only as top-notch situation comedy, but also as wry and timely satire, an Iraq War primer for those who think The Daily Show too on-the-nose. The discs are stuffed with extras: The commentaries with the creators and stars are witty and illuminating, the discarded scenes are better than anything ABC puts on the air, and the blooper compilation, featuring David Cross' rant about Fox's poor marketing of the show, is put together like an Emmy submission reel. Best TV-on-DVD box, ever. -- Robert Wilonsky

Kingdom of Heaven (Fox Home Entertainment)
If nothing else, Ridley Scott's Crusades epic proves that the director himself is a believer: You must be counting on eternal life to make a film so thoroughly plodding. It stars a miscast Orlando Bloom, who transitions from murderous blacksmith to Baron in God's Army with nary a facial expression. Scott's attempt to portray each side of the conflict fairly is noble, sorta, but all it does is suck the drama out of the giant final battle. DVD options include a "Pilgrim's Guide" version, subtitled with historical trivia that pops up throughout (leprosy: not good). The second disc consists mostly of two shorts that are more infomercials than documentaries. -- Jordan Harper

This documentary, made by Xan Cassavetes for the Independent Film Channel, will enrage as much as it will educate. Not only will you learn of the existence of Z Channel -- among the first pay-cable stations in the U.S. -- you'll also yearn for the art-house films it aired under the guidance of Jerry Harvey, who sought out the uncut, unaltered masterpieces of his heroes (among them Sam Peckinpah, Robert Altman, and Orson Welles). At a time when HBO and its lazy brethren air an eternal loop of mainstream crap, Z is needed more than ever; alas, it's gone now, like Harvey, who killed himself and his girlfriend as the network was going busto in the late 1980s. The second disc includes scenes from a 1987 AFI tribute, Z Channel's talk show hosted by Charles Champlin, and a half-hour radio interview with Harvey himself. -- Wilonsky

High Tension (Lions Gate)
If the summer cult hit The Devil's Rejects made America safe for grindhouse horror again, perhaps there'll be no more need to import films like High Tension. This French slasher flick, so close to classic that it hurts, got a wide release in America with the voice of protagonist Marie (Cécile De France) dubbed into English. It starts with great economy: Family, farmhouse, mad killer, and . . . roll film. This DVD comes unrated, which turns the inevitable buckets of blood into barrels. Unfortunately, the horrifically stupid twist-ending remains intact; what had been a remarkable genre film falls victim to crap psychology and a total disrespect for logic. Among the unremarkable special features is the option not to dub Marie's voice. An even better feature you can create all by yourself: Turn off the movie when the cops arrive, and you'll walk away satisfied. -- Harper