Hot on the trail of Bigfoot in eastern Ohio. 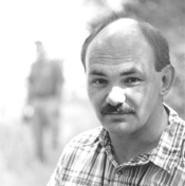 This season, all the well-dressed Bigfoot hunters are wearing satin blouses, rhinestone hair clips, and the ultimate wilderness accessory: a purse-sized spray can of Bear Guard, sold by the case. For Peggy Stilman and her sister, Veronica Burchette, such timely attire tells the world: I want to find Sasquatch, and I want to look good doing it.

In a remote bramble favored by 'coon hunters, they listen for the rustle of the wildman in the leaves. Sunlight catches on their costume jewelry, making it sparkle like nearby Locust Lake.

For 15 years, the pair have been part of a close-knit group tracking Bigfoot in the woods near tiny Newcomerstown, Ohio. Though the monster-mammal has thus far eluded them, a good time hasn't.

"It keeps you young," murmurs Peggy, the shyer sister, her fluffy hair teased into a platinum-blond halo. "We'd rather go out and look for Bigfoot than to dance."

Joining them are Don Keating, president of the Eastern Ohio Bigfoot Conference, and Marc Dewerth, 31, a Jerry Lewis look-alike who once glimpsed Bigfoot from 75 yards away. "He was trying to intimidate the shit out of me," recalls Marc. He almost got it on video, except whenever he trained his camera on Bigfoot, it mysteriously wouldn't focus.

Only 15 percent of Americans believe in Bigfoot, says Don, a fact that doesn't faze him. Nor do the 1,800 hours of "field research" video he's shot -- about 1,799 hours and 59 minutes of which capture tree bark and chirping birds, the remainder featuring a centimeter-high "albino Bigfoot" that could be mistaken for a strand of hair on the lens.

No, the slippery nature of his prey just makes him look harder, under every rock and in every puddle reflection.

"You can get very frustrated in this field," he sighs. "You're relying a lot on dumb luck."

The 37-year-old stereo assembler has pursued Bigfoot since 1985, when he went to the Tuscarawas County Library to borrow a book on UFOs. He'd been planning to start a UFO club. But the Bigfoot book, Sasquatch, the Apes Among Us, had better pictures. So he decided to start a Bigfoot club instead.

By then, Bigfoot was already a passé trend, his popularity peaking in 1976 with the seminal film The Legend of Boggy Creek, starring Smokey Crabtree.

So Don had modest expectations for the club's first meeting -- maybe 15 people. But 30 came, most hailing from what paranormal insiders call "The Sasquatch Triangle" -- Guernsey, Coshocton, and Tuscarawas counties. Don's documented 228 Bigfoot sightings there, not counting "the teenage kids that ride down my street, making strange guttural noises out the car window."

The meetings mushroomed into the Annual Bigfoot Conference, which Don calls "the biggest event on the face of the earth, as far as Bigfoot is concerned."

This year, 225 people attended, sucking on Bigfoot suckers and seeing paw prints in the dented grass. They stayed in Newcomerstown hotels and ate Newcomerstown food.

Yet to the ungrateful leaders of Newcomerstown (population 4,012), Don is still just a balding guy who lives in his grandpa's basement. The police chief, mayor, and editor of the Newcomerstown News won't discuss him, creating a wall of silence that only a guy in a monkey suit, real or imagined, could knock down.

Which is a real shame. "Newcomers- town's the hometown of Woody Hayes, the temperamental Ohio State football coach," Don laments. "They could also be known as the Eastern Ohio Capital of Bigfoot, but they just don't want to take the ball and run with it. Which is fine with me."

Accounts of local sightings, transcribed in Don's "Monthly Bigfoot Report," include descriptions of a red-eyed Bigfoot eating a cow, a happy Bigfoot watching children on a swingset, and a preoccupied Bigfoot hurrying down an ATV trail.

Veronica and Peggy grew up during simpler times. "Our dad raised us to believe in UFOs and everything." A hydraulic engineer who worked on the first X-16 rocket, "He was way before his time. He believed that we were brought here from another planet. So there's really nothing we wouldn't believe."

Well, maybe one thing. Veronica doesn't believe in alien abduction. "I think it's too scary." But she and Peggy are firm believers in the Bigfoot-UFO connection.

The sisters aren't sure what the Bigfoot-UFO connection is, exactly. Maybe Bigfoot gets dropped off on earth by UFOs, or maybe he just has a computer chip implanted in his brain that reports back to the aliens. All they know is that "people tell me [that] when they see Bigfoot, a while later there will be a UFO," says Peggy.

Don believes in aliens, having seen a UFO while scanning the skies for the space station Mir. But he doubts the Bigfoot-UFO connection. Marc is skeptical of aliens, but entertains the possibility that "flesh-and-blood creatures," like the Loch Ness Monster and Yeti -- the Abominable Snowman, could be out there.

To show that there's no hard feelings between dissenting Bigfoot schools, Peggy presented Don with an eight-foot-high Bigfoot she made out of plywood. "It was a birthday present," she beams, passing around a picture of a blond-bearded man dwarfed by the beatifically grinning likeness of the man-beast.

Don keeps the giant craft in the closet, unwilling to award it a place of honor in his Bigfoot shrine, which includes the wall of research tapes, photos of him posing with various Bigfoot experts, and three Bigfoot watercolors.

He's proudest, though, of the plaster of paris cast he made of Bigfoot's foot. Large as a prize watermelon, its five toes are numbered.

Some researchers claim Bigfoot only has three toes. Don knows the real Bigfoot has five.

"If you look at [the tracks] real close, you can see the other two digits," he says.