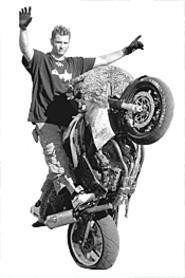 Kellen Winslow should take notes when more than 200 motorcyclists from as far as Great Britain and South America compete for a $10,000 purse at this weekend's Stuntfest. The sixth annual competition is hosted by the Starboyz daredevil cycle troupe, which will show off the very same tricks that sidelined the Browns' tight end. Over two days, bikers will square off in eight contests, including Longest Stoppie, in which they'll compete to see who can ride on his front wheel the farthest. "Those guys out there are pushing almost a quarter-mile on that wheel," says Caraboolad, co-owner of the Starboyz stunt team. "It's definitely something real crazy." There's also the demolition-derby-like Last Man Standing, in which each biker pops a wheelie and tries to topple his opponents from their machines. "It's almost like Braveheart and those old-school battles," says Caraboolad. "Everyone charges at each other and starts mutilating each other." Bones break from 10 a.m. to 6 p.m. Saturday and noon to 6 p.m. Sunday at Thompson Raceway Park, 8233 Sidley Road in Thompson. Admission is $20; call 330-329-7286. -- Cris Glaser

If you thought the sand-court showdown between Maverick and Iceman was a showstopper, you haven't seen Divots' Tuesday-night Volleyball League. (The sports bar also hosts less intense leagues three other nights a week.) And with an adjacent sports park -- featuring miniature golf, batting cages, and a driving range -- and outside patio, the bar always has something to do, even if the games are jammed (summer volleyball leagues start July 15). "It's a diverse crowd," says owner Tony Scheida. "We have teams of 18-year-olds and teams of 50-year-olds. Very laid-back, very relaxed." Most nights, teams play 10 three-game matches. Four-person teams play on Tuesdays, co-ed four-person squads compete on Wednesdays, and co-ed six-person teams face off on Thursdays and Sundays. Games start at 6:10 p.m. at Divot's, 13393 York Road in North Royalton. Entry fees begin at $25 per person, per season; there's no cover for spectators. Call 440-237-3342 for info. -- D.X. Ferris

At Friday's Family Fun Night at Edgewater Park, folks will learn that things aren't all black-and-white when it comes to skunks. "They [can be] apricot, champagne, mahogany," says Deb Cipriani, who runs Skunk Haven, a North Ridgeville skunk shelter. Cipriani will be showing off some of her multihued (and multi-pewed) friends, including an albino one, as well as sharing some facts. "Skunks cannot see that well," she points out, "but they're very determined, smart animals." Get a whiff of them from 7 to 10 p.m. Saturday at Edgewater State Park, 6500 Cleveland Memorial Shoreway Northwest. Admission is free; call 216-881-8141. -- Lucy McKernan