Beck Center's Magnolias are ready for the compost pile. 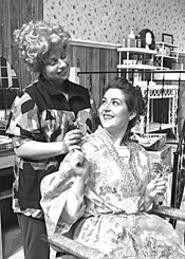 The unique potency of female bonding has been celebrated for eons, from Lysistrata to Thelma and Louise, and for good reason. When chicks get together and pool their resources, grrrl power can become a formidable force. But even more telling is the everyday occurrence of women sharing the joys and sorrows of their daily lives. This intra-gender support and maintenance system helps many navigate the often treacherous waters of what is still -- economically, occupationally, and in other ways -- a man's world.

Almost 20 years ago, playwright Robert Harling attempted to capture the essence of women's emotional networking in Steel Magnolias, the now-familiar story of six gals in a backwater Louisiana town who laugh, cry, and tease (hair and each other). Set in Truvy's Beauty Spot, a carport turned hair salon, the comical yet touching play is a theatrical gold mine for actors and a director who can craft sharp characters and ignite some sparks in this classically feminine environment. Unfortunately, the Beck Center troupe assembled for this task falls flatter than a botched perm on a humid August afternoon.

Shop owner Truvy Jones, along with her new employee Annelle, play host to four Saturday hairdo regulars over the span of a couple of years: M'Lynn and her grown daughter Shelby, along with two crusty older women named Clairee and Ouiser. As if the names weren't enough to tip you off, these women are southern-fried down to their roots, and they all are given Dixie-cute things to say by Harling. Talking about a local fellow, one observes, "He's a gentleman; he takes the dishes out of the sink before he pees in it." A passel of redneck humor is balanced by a more serious issue when it's revealed that soon-to-be-married Shelby is diabetic. This condition becomes an even graver issue when, a couple of scenes and many months later, she is expecting a child.

Clearly, everything is in place for a passionate excursion, but this boat never leaves the dock, due in large part to a lack of steering by director Sarah May. This is perplexing, since May is an accomplished and perceptive director who has helmed many outstanding productions over the years. But in this instance, her Steel Magnolias turn into droopy dandelions. One of the primary shortcomings is May's mechanically unimaginative blocking -- many characters stand (or sit), pivot, and stare whenever someone else starts talking. Instead of the bustle one would expect in a beauty parlor populated by old friends, with hairdressers multitasking like crazy and gabbing while they curl and spritz, a strange lethargy abounds. As a result, lines are read in proper sequence, but characters are never developed, and the emotional center of the play slowly slips away.

Most of the cast members have fleeting moments of competence, but none accomplish the whole job. As the sassy shop owner Truvy, Maria Corell launches some tasty verbal jabs, but she never becomes the charismatic individual around whom all the others orbit. As diabetic Shelby, Melinda Hughes is all sparkly innocence, but her interpretation doesn't deepen as it would with the passage of time and a new regimen of dialysis treatments. Many of the punch lines are entrusted to the two older ladies, and Bernice Bolek and Rhoda Rosen, as Clairee and Ouiser respectively, deliver some can't-miss laughs. (Speaking of a young woman in town, Ouiser notes, "The nicest thing I could say about her is that all her tattoos are spelled correctly.") But their softer sides are not credibly revealed -- they just go all squishy with hugs, instead of finding unique warmth within their acid-tongued personas.

The new stylist Annelle, as portrayed by Amy Pawlukiewicz, is such a non-entity in the first act that her transformation into a born-again Christian later on feels awkward and mystifying. Dramatically, the play is structured to peak when M'Lynn comes back to the salon after her family tragedy, but Julie Ketterer plays this climactic scene using only one note, and it's the wrong note at that. By totally missing M'Lynn's torment, the play ends in a vacuum; M'Lynn's solo exit, which is meant to be a surefire applause generator, was greeted with silence.

Some of the blame must also be doled out to usually adept scenic designer Don McBride. If this little beauty salon is supposed to be a renovated carport, it could have easily accommodated four extended-cab pickup trucks and a medium-sized backhoe. The bilevel shop is so huge, the actors bob around like corks in an immense swimming pool. A cozier salon might have helped these particular performers interact more readily and realistically.

Perhaps the best advice regarding this production -- in an otherwise outstanding season at Beck Center -- is given by Ouiser, who says she doesn't attend plays because "I can sleep for free at home." Either way, sweet dreams.