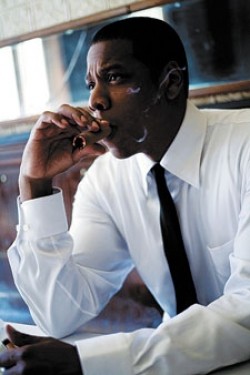 When asked why he wouldn't publicly support political candidates, Michael Jordan once supposedly and famously quipped, "Republicans buy shoes too." That brand of absentia from activism ruled for decades among the NBA's marketing elite, when the only platform endorsed by megawatt superstars was that of the Swoosh. That's why this election was refreshing, as a spate of NBA moguls, including Dwyane Wade, have stepped up to lend their voices to the presidential candidates - almost exclusively for Obama, as far as I know.

Last Wednesday night, LeBron hosted Jay-Z's Last Chance for Change rally at the Q. It was the second time the King had stumped for Obama. After completely ducking the Darfur issue last year, and tepidly making only the most noncommittal and vanilla of statements about human rights issues revolving around the Beijing Olympics, James' shedding of the Jordan veil of measured political neutrality is welcome change.

Whether the King's endorsement moved any undecideds or Republicans toward Obama is debatable. More likely, and more important, it's a sign to his fans that voting is essential and nonparticipation is simply not an option.

-- While Jay-Z was throwing down his hour-and-a-half set at the Q, LeBron bounced around onstage, mouthing every word to every song - one of Hova's posse for the night. Watching the King dance, it struck me that he looked more right, more natural, more relaxed and more childlike than any of us outside his inner circle have seen him since before he donned a St. Vincent-St. Mary jersey.

The world of a hip-hop mogul is no less contrived, artificial or image-conscious than the biodome of personal inscrutability that LeBron inhabits, so it's a bit ironic that LeBron's role as posse member No. 1 would provide a brief unguarded glimpse at the King. But there it was. For a couple of hours, LeBron was a fan first, then friend, then icon.

-- OneSeason.com, which went live just over a month ago, is a virtual market of athlete stocks. You put up real money to buy shares of your favorite stars, from Tony Romo to Tom Brady to Evan Longoria. Buy or sell to your heart's delight on this brilliant gift to everyone who ever dreamed about combining day trading and sports.

LeBron is the only Cleveland athlete among the current 38 offerings. As of Monday morning, one share of LeBron (KING) could be had for around $2.50. Because of the relative obscurity of the site and the struggle to retain visitors as investors, the toddler market has been extremely volatile, swinging wildly as OneSeason continues to strive for attention and stability. Still, with these prices, it's not a bad time to get in on the ground floor.

-- While the Cavs haven't officially unveiled their throwbacks for this season, I can tell you that old-school fans will be pleased as punch when the designs go public. Also, according to Paul Lukas' latest Uni Watch column on ESPN.com's Page 2, the Cavs will have a very odd uniform-based promotion during the year. Mum's the word on that one, but it promises to be strange.

-- Before the 2008-2009 NBA campaign tipped off, online gambling site Bodog handicapped the odds of the first coach to be fired this season. Just like the past three years, Cavs coach Mike Brown was on the list. Here are the odds: