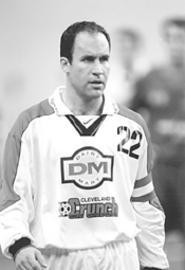 Ten years ago, Andy Schmetzer signed with the Cleveland Crunch and was named that season's "Unsung Hero." Last season, after a decade with the team, he again garnered "Unsung Hero" status. But the truth is, in the world of sports, all indoor soccer players tend to be unsung heroes.

"I've been playing soccer long enough that rarely do I go, 'I can't believe we're not on the front page,'" Schmetzer admits. "You just kind of get used to it. The good thing about Cleveland is that most people know about the team. They may not know who I am or have never seen the team play, but most people at least know who we are."

Part of that is thanks to the team's winning history. In its 11 years of existence, the club has advanced to championship play almost every year and has won the National Professional Soccer League title three times. Schmetzer gives a lot of the credit to the fact that the Crunch's nucleus has remained basically intact throughout the team's history.

"For some reason, this team's been able to keep that core together, and we've grown real close to each other and we enjoy playing," Schmetzer says, though he admits hometown pride is not necessarily the root of their team mentality. "When you find a good place to play and you're making a living at it, you don't really want to leave. It's not like we're being lured with big bucks to Harrisburg."

This year's scorecard is gearing up to be a repeat of the last: a slow start, with a midseason rally that gets them to the playoffs. Only one other franchise in town has consistently offered fans the promise of postseason play in the last decade, and it manages to fill the stands every year. But not the Crunch.

"Hopefully, at one point, it'll get to be front-page news," Schmetzer says. "But I get a strange feeling I'd be long gone by then."