With help from you, evil prepsters go torturing in the remake of Funny Games 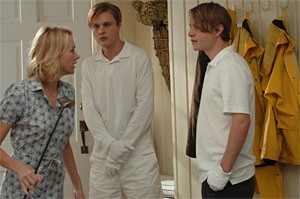 "You must admit you brought this on yourself," reads the movie's poster. It's a judgment aimed not only at newcomers to the party, but anyone deviant enough to know what they're in for and show up anyway.

At first glance, Funny Games, a remake of Michael Haneke's 1997 Austrian film of the same title, sounds little different from 100 other ruthless home-invasion thrillers that cater to the gray zone of viewer enjoyment — which Hitchcock mischievously alluded to when he spoke of "putting the audience through it." Two preppie lads in tennis togs appear on the doorstep of a bourgeois family's vacation home. After some pleasantries that grow increasingly sinister, the vacationers get unnerved and ask the visitors to leave. With a show of aggrieved politeness, they refuse. They remain polite even after they borrow one of Dad's expensive brand-name golf clubs — to shatter his kneecap.

The visitors herd the family into the den and make a little wager that no one — not the pretty mom, not the well-to-do dad, not the blameless child — will live to see 9 a.m. the next morning. Let the games begin! The chattier of the two tormentors glances away from his captives and looks directly into our eyes. "Who are you betting on?" he asks, addressing his accomplice: you.

If you stay to watch, you're agreeing to the rules of the game: Any chance of hope, escape, or revenge will be raised (yes!) only to be dashed. The family will be butchered, one by one, for your viewing pleasure. After all, as Michael Pitt's diabolically cordial ringleader informs his victims, "Entertainment is important."

Although much remains the same about the so-called Funny Games U.S. — dialogue, set design, static camera setups, the sensation of deepening panic — Haneke has shifted a few variables. The language: It's now English. The players: They're now Hollywood stars, which changes the dynamic. In the original, the actors' status as relative unknowns made the snuff-movie vibe chillingly credible. Tonight's menu serves up executive producer Naomi Watts (as Mom) and Tim Roth (as Dad) — people we pay to show us a good time, even if it involves a little rough stuff.

For those with the slightest ethical qualms about their hard-core jollies — and the nerve to face them with a searching mind and a reactivated conscience — Funny Games is a pulverizing but essential personality test. When the invaders (Pitt and Brady Corbet) force Watts to strip naked, do you own up to frustration that the camera never dips below her neckline? When NASCAR blares from the requisite big-screen TV on one side of the frame, and Watts lies bound, gagged, and stripped on the other, does your attention wander back and forth? When the movie's most heinous act (of many contenders) occurs only as background noise — an offscreen maelstrom of shrieks, torment, and grief — do you get exasperated that the camera records, with plodding bovine stolidity, the fixing of a sandwich?

That mission makes Funny Games an easy movie to despise, but an impossible one to shake. The ultimate irony is that Haneke is very, very good at the genre he appears to hate: His anti-suspense measures prove far more upsetting than the usual thriller.