With its secret boys club and bloody good fun, Wanted has all of the fight with none of the guilt 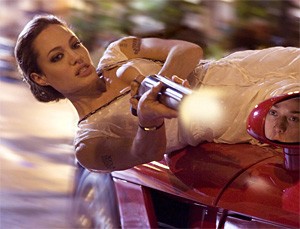 Of the summer's many revenge-of-the-nerd fulfillment fantasies — from The Incredible Hulk all the way down the megaplex food chain to The Foot Fist Way — Wanted stands the best chance of dislodging Fight Club from fanboys' Facebook pages. It has the same dizzying flipbook style, the same kicky ultraviolence, the same undeniable appeal of punch-clock payback — and best of all, no irony! Fed up with your shit job, your bitch boss, your slut girlfriend, your shriveled manhood? Screw reading The Purpose Driven Life. Embrace your inner hitman and cap a few asses.

The first rule of David Fincher's Iron John uprising was: Don't tell anyone. Screw that noise (or lack thereof). If Fight Club was a cautionary tale, Wanted comes on like a recruitment video — the story of how a meek, pallid cube jockey, Wesley Gibson (James McAvoy), morphs from loser to bruiser by joining a secret society of assassins. Though adapted by screenwriters Michael Brandt, Derek Haas, and Chris Morgan from a Mark Millar-J.G. Jones comic-book series, its origin lies less in comics themselves than in the old back-of-the-book ads that promised 98-pound weaklings how to find the brute within.

So when shaky, pill-popping Wesley — cheated on by his girlfriend, betrayed by his so-called best friend, and berated by his harridan boss at a soul-sucking account-management McJob — gets yanked out of a drugstore checkout line by a lithe hottie with a knack for zigzag marksmanship, he becomes the prime candidate for a hired-gun makeover. Turns out Wesley's absentee father belonged to The Fraternity, a clandestine clan of weavers who have maintained order (all evidence of human history to the contrary) by weeding out the world's undesirables, the names of whom appear in coded fabric. (For delivering this hooey with customary gravitas, Morgan Freeman, The Fraternity's oracular Mr. Big, deserves something bigger than an Oscar — maybe something in the Vatican.) And like his old man, Wesley is a natural-born killer — with superhuman reflexes, mad stunt-driving skillz, and death strikes that swerve bullets into serpentine trajectories.

Even with a well-deserved R rating — the Red Cross should develop funnels to catch all the zero-gravity splatter floating in the movie's screen space — Wanted is the most juvenile of the summer's superhero movies, and in some ways the most up-front about its stunted playground machismo (the source of Fight Club's irony). This is a boy's, boy's world. As played by McAvoy, Atonement's aggrieved innocent, Wesley is a cartoon of 'whipped male drudgery, needled by his best friend's smarmy refrain of "He's the man." Women figure into the story as either obstacles or turncoats. The battle cry here is "Grow a pair," and there's no more blood-boiling an insult than being called a pussy — which is bizarre, since the most lethal ass-kicker on call is a woman.

The appeal of Director Timur Bekmambetov's style — that everything exists for sensation, logic and natural law be damned — is also its limitation. Wanted never tops its gee-whiz opening sequence, in which a Fraternity brother takes out a rooftop of bad guys with wicked gun fu. There are limits even to the number of times this Grand Theft Auto admirer can watch blood slung across the screen in fetishized slow-motion globules. In the end, Wanted may be most notable for cementing the connection between superhero movies and the cinematic craze they have temporarily supplanted, torture porn — both genres that, like Fight Club, address our ambiguous fascination with being powerless and invulnerable at the same time. But Bekmambetov's movie evaporates pretty quickly after it's consumed — something you can't say of Fincher's film, which shadows almost every frame of this cowering-male power trip. The first rule of Wanted should be: Don't tell anyone about Fight Club.