Larry the Wolf leads the Manimals back to the stage. 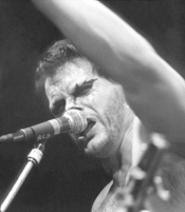 That Cleveland's Manimals came back from the dead is as perfectly suited to the band's "horrorcore" image as its gig this weekend at the Frightvision horror and sci-fi convention, though Larry the Wolf admits even he didn't see a disinterment coming.

"I walked away from it," he recalls of the music scene the Manimals quit in 1986, after one EP and opening gigs for the likes of Megadeth. "I was really pretty discouraged with music."

But when the Misfits -- friends of the Manimals from the old days -- re-formed in 1996, they asked Larry to help fill Glenn Danzig's shoes at their Cleveland show. Not only did performing put the bee back in Larry's bonnet; it also made him realize firsthand what an impression he had previously made.

"I was surprised at how many people came up afterwards and said, 'Where have you been?'" Larry recalls. "It was a shock to me. I figured maybe we'd be an afterthought."

Now playing only a limited number of shows -- to ensure that each one is "like an event," so fans don't get disinterested -- the Manimals have also started to hit the horror convention circuit, where their cult status makes them as much a draw as the B-movie and sci-fi TV stars signing autographs. This year's Frightvision is the Manimals' second.

"Right now, because I'm a huge horror fan, it's been a good fit," Larry says of the conventions. "There's some people who don't get a band being there, but it's really cool to have this mixture of different things going on, and a horror-type band thrown in there -- for some people, that's the high point."

Especially for fans at a 1999 convention in Washington, D.C., who were thrilled to see the resurrected Manimals, more than a decade after they thought the band was gone. "That was pretty cool," Larry admits. "So we'll probably do more of them, but I don't want to do them exclusively, because then you start to get this thing that you're a novelty band."

Nor are they are a nostalgia band, he's quick to add. Before even thinking of playing out, the reincarnated Manimals (minus guitarist the Wraith, a "non-issue" replaced by Count Orlock, according to Larry) put together an album's worth of new material, which became 2000's Horrorcore. Larry even considered changing the name.

"I wanted to make sure people knew this wasn't a 1986 band revisited," he says. "I really wrestled with the idea of using the name and the whole thing again, but what bothered me was, I felt it had never really been done correctly in the earlier incarnation. I want to treat it like we are a brand-new band that happens to have a history."

Besides, the way Larry sees it, "the Manimals thing I started years ago, and that lives and dies with me."