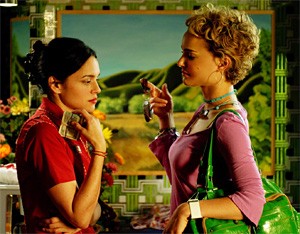 My Blueberry Nights has been called a road movie, but it's more of a destination film with three settings: East goes West when Elizabeth (Norah Jones) ditches New York with a broken heart and lights out for Memphis and the gambling hub of Ely, Nevada. Known as "Lizzie" in Memphis and "Beth" in Nevada, the shell-shocked Elizabeth has transformative interactions with the locals, then returns to New York, healed and with a great new hat.

But even with all of Route 50 at his disposal, writer-director Wong Kar Wai wastes opportunity. With Jones plucked from the realm of adult-contemporary radio on purely aesthetic grounds, it's hard to tell who failed whom: She looks beautiful if benign, and lacks the necessary magnetic ache. Jones can't be entirely blamed for having an easier time chewing on day-old prop pastry than on some of the lines here. Still, her delivery is oddly behind the beat, a problem of phrasing curious for a musician — particularly when singer Chan Marshall shows up as a mysterious ex and slays us with her inspired utterance of "sen-ti-men-tal."

The story begins in New York, where Elizabeth has a Snapple-throwing shit fit outside a diner owned by Jeremy (Jude Law). Elizabeth's ex-boyfriend has recently been spotted in the diner with a new love, and she is beside herself with grief; in the first of a series of heavy signifiers, she hands Jeremy a set of her ex's apartment keys, which he plops into a goldfish bowl full of similar cast-offs. Jeremy offers solace in the form of brisk advice and a slice of blueberry pie. A series of brief diner encounters ensues, with the sweetness of the couple's exchanges sometimes literally written on their faces. (The scenes are shot through the café's window, which is covered in advertisements for the cookies, pies, and cupcakes sold inside.)

Elizabeth hits the road with Jeremy's heart half in tow, sending him chaste postcards from the two cities where she ekes out a living for the better part of a year. Wong salutes Tennessee Williams in the Memphis segment, and while he clearly had a gay old time, the story between Arnie (David Strathairn) and his estranged wife Sue Lynne (Rachel Weisz) feels more like a tangent than a chapter. Weisz struggles with her less-forgiving stereotype: the stone-cold slattern. Natalie Portman fares better as a troubled poker babe in Nevada; she manages to fill the empty space Wong leaves in his close-ups with something resembling human complexity.

The disappointment here doesn't have much to do with Wong doing America — he's been doing America for years, even in Chinese — but with Wong doing Wong, and not up to his own standard. Toward the end of Happy Together, Wong's other road movie, Tony Leung's character says, "Turns out that lonely people are all the same."