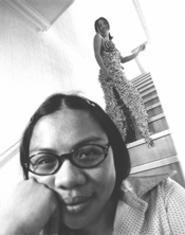 In the echelon of fashion emergencies, a shorts crisis ranks up there with Don King's shock 'do. If the seams don't meet right, the material bunches up in the wrong places.

"It's that crotch area," sighs Lorna Santiago, a textile sculptor whose preferred medium is aluminum pop tabs. "I'm making shorts right now. I had a model try them on, and I'm like "Oops! I guess this is not gonna work.' It was too bulky in one area, too tight in another. I don't know. Pants were easy!"

Though she weaves, wraps, and ties knots really well, Santiago doesn't know how to sew. But that never stopped her from making clothes. She favors the kind "that people can actually wear, but they might have some prints on their bodies after they sit down," making those criss-cross thigh marks from lawn furniture virtually obsolete.

A self-described "shoe queen -- wait, no, I'm an everything queen!", Santiago has a way of working around her problems. If she needs to do something highly technical, like attach the sleeve on a shrug, she calls on the nearest mom who can whip out three pairs of corduroy rompers in one sitting.

"My co-worker, Pam, is very helpful," she confesses. "She knows how to sew, so I always ask her for advice. Me not sewing, she helps me with "Okay, this is actually not gonna work. How do you make this work?'" (For such consultations, she owes Pam Griffith one of her custom-made cone bras that, with a flick of a bejeweled wrist, turns into a purse. Madonna, at least in her Jean Paul Gaultier incarnation, should be so versatile.)

Besides convertible bras, Santiago also sees the untapped potential of a fabulous raincoat in every forlorn box of clear plastic drinking lids. No needle? No sweat. Get a hole puncher, punch holes in the lids, and knot them together with silver wire. The end result: a "wearable shower" that won't keep out the rain, but makes a nice rain sound when the lids rustle. Want the look of chain mail but not the feel? Tie pop tabs with lots of soft thread to make pants with a warm and furry reversible lining. If the knight look gets old, turn the pants inside out, and they're a walking weaving, their texture a cross between gorilla fur and marabou feathers.

"I've got this blow-up furniture," she divulges. "I want to do something with that. But I don't know what yet." She also has big plans for a box of used floppy disks she found at the thrift store: a "data dress" that might contain the secret Pentagon brownie recipe or someone's term paper on the French Revolution. Right now, she's getting it ready for her "coming out," her first full-length fashion show, at Cleveland Public Theatre on April 21.

Santiago, who finally settled on a degree in fiber arts after she had taken every introductory art course at Kent State University, will share the show with Sandra Curtin Gallucci, a classically trained seamstress who wouldn't be seen in public without her sewing machine. The pair will show a wedding dress they're collaborating on, with Gallucci doing the bodice in simple white satin and tulle and Santiago making a long, lacy princess train, from purple tulle and six-pack rings, that's sure to have a secret life of its own.

While Santiago strives for lawn-chair legs, Gallucci strives for elegance, both out on the town and on public transportation. Her "funny noise" skirt -- a full-length Cinderella skirt made of three layers of brown taffeta -- got good feedback from commuters the last time she wore it on the Rapid. Ordinarily, she favors fine fabrics from Europe, but she's branching out to plastic tablecloths. She and Santiago recently bonded over a shared bolt of shocking-pink fake fur, one of Santiago's craft-store finds.

"I think we're influencing each other, because she saw something in my car I got from Pat Catan's and said, "Oh! I would love to use that,'" says Santiago. "And now that I know her, I'm starting to actually use fabric."

"I even tried to tie those pop tabs together," confides Gallucci. "It was a good experience to do it, but it takes way too long."

The women met at an outdoor art market last summer, when Gallucci was in the throes of homesickness. She had just moved to Cleveland from Switzerland, leaving behind a close circle of friends who brought their sewing machines over to each other's apartments for all-night stitching parties.

"I still don't know many people here," says Gallucci. That made it tough to find models for her show, so she tried the audacious approach. "Whenever I went out, I talked to people and asked them if they would be in my show. In the beginning, the girls probably thought I was drunk. But we got together a lot, and now we've become friends."

Drunk on pop tabs, Santiago's models will be her co-conspirators in the Cleveland experimental dance group SAFMOD, in which she moonlights as a stiltwalker and mosquito (at least that's the costume she made for herself for last year's Parade the Circle celebration, enveloping herself in black tulle and silver netting).

She came to stiltwalking late in life, at least for a young old-biddy-in-training. "I'm 30. It's bad. It's like okay, be an adult now. A lot of people look at you. "How old are you? Oh, you should be younger.' Maybe because I look young. I told my co-workers, "You know how you don't ask people their ages? Don't ask anymore.'"

Or maybe it's all the scarring. "I've fallen a couple times now," she says of her tall sport. "I try to do a trick and then -- boom! I still have a mark, here. I fell in the park. I tried to do this gallop thing and ended up falling. It's hard when you're three feet up."

But walking to the corner store on sticks is a great way to meet people. "Adults joke around. "Boy, I like tall women.'" she says. "You get kids asking questions like "If I kick you, will you fall?' If you kick me, I'll fall on top of you!"

Though it's that stage of the morning when most of the people at the coffee shop are snoring into their mugs, Santiago, a professed morning person, is raring for high noon in bell-bottom parachute pants that bring out the highlights in her hair. Both are the exact same shade of Orange Pylon.

"I love color," she enthuses. "I always like to name colors. How do you sign up for that job? Lemon Soufflé. Pistachio. Tart, which makes me think of yellow."

Her hair has been her lifelong palette. Blue, teased into a big Howard Jones mushroom-cloud style, looked especially good with her uniform at St. Augustine high school. "One time, this sister came up to me and said, "Lorna, you have to calm your hair down. Calm it down!' She actually reached out and pressed it down. Otherwise, nobody really said anything. I was a good student."

Also practicing tenacious tolerance were her parents. The family had emigrated here from the Philippines when Lorna was four, and they didn't want to be too strict about tradition. When she was 10, they let her sew magazine clippings on her shirt and even wear it in public once or twice.

"She was always getting the boxer shorts off my husband," Lily Santiago recalls. "We went to Parmatown, and she's wearing those. I say, "Aren't you embarrassed wearing that?' There is an opening in front that really looks ugly. I sewed that shut. I say, "I could buy you nice shorts.' "No, mommy, I want this kind of shorts.'"

But that was then. Right now, Santiago's really digging the woodlike ribbons used to weave baskets, which are great for wrapping cheap, cherry-red yarn around, then fluffing out for funky-fresh effect. (They'll be the trim on a hip-hop-style vest made from see-through needlepoint squares, in lieu of fabric.) Other recent obsessions: Flames, for a boss motorcycle jacket made entirely of black, orange, and red buttons she got from somebody's grandmother. And the cotton-candy combination of pink and purple, for that aforementioned shrug -- a short jacket worn out on the town -- which is decidedly from her Donny and Marie Period.

"I remember when I was little, I used to watch Donny and Marie. You know in the beginning, they'd have these ice skaters? They did these patterns; they would show them from above. And I'd be like, "Okay, that's really cool.'

"I was always thinking about pattern. For Easter, my parents would hide foil Kisses, and my brother and I would race to find them. I don't know what we won -- but we were the winners! I wouldn't eat them right away. I would make patterns with them, spirals or stars on the table, thinking of Donny and Marie."

In Santiago's sewing basket right now, delicately folded, are fun-fur bikinis in all the pastel colors of the Necco wafer rainbow. "My swimwear line," she says proudly. Perfect for the cavewoman in curlers, they have that cannibal-meets-angel look. Turn them over, and the uneven stitches, done up in multicolored metallic thread, twinkle like tiny constellations. Or maybe moonlighting mosquitoes.

Laura Putre can be reached at laura.putre@clevescene.com.